Items related to Essential Outsiders: Chinese and Jews in the modern... 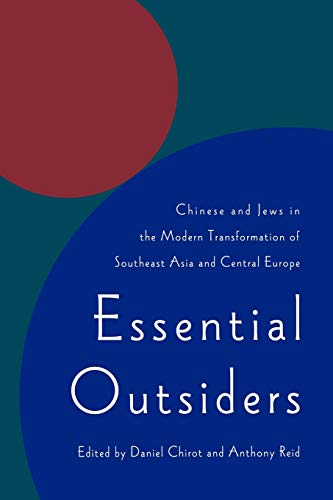 Ethnic Chinese in Southeast Asia, like Jews in Central Europe until the Holocaust, have been remarkably successful as an entrepreneurial and professional minority. Whole regimes have sometimes relied on the financial underpinnings of Chinese business to maintain themselves in power, and recently Chinese businesses have led the drive to economic modernization in Southeast Asia. But at the same time, they remain, as the Jews were, the quintessential “outsiders.” In some Southeast Asian countries they are targets of majority nationalist prejudices and suffer from discrimination, even when they are formally integrated into the nation.

The essays in this book explore the reasons why the Jews in Central Europe and the Chinese in Southeast Asia have been both successful and stigmatized. Their careful scholarship and measured tone contribute to a balanced view of the subject and introduce a historical depth and comparative perspective that have generally been lacking in past discussions. Those who want to understand contemporary Southeast Asian and the legacy of the Jewish experience in Central Europe will gain new insights from the book.

6. Essential Outsiders: Chinese and Jews in the Modern Transformation of Southeast Asia and Central Europe

10. Essential Outsiders: Chinese and Jews in the Modern Transformation of Southeast Asia and Central Europe