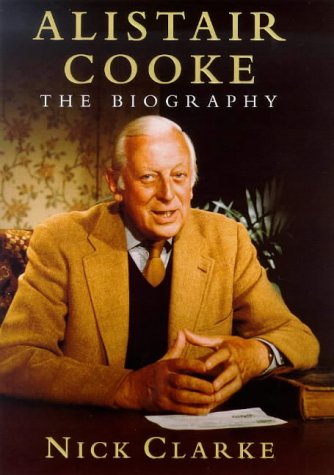 Nick Clarke read Modern Languages at Cambridge and after three years with the Yorkshire Post joined the BBC TV News in Manchester as a reporter in 1973. He spent five years on The Money Programme, three years on Newsnight and has been a presenter with BBC Radio 4 since 1989, initially with The World This Weekend, moving in 1994 to The World at One. He also presented Radio 4's Round Britain quiz and was a regular guest panellist on The News Quiz. He died in November 2006.

Clarke, a BBC television and radio journalist in London, rarely brings Cooke (b. 1908) to life on the pages of this new biography, already published in England. To lots of Americans, the British-born Cooke is known primarily as the urbane, erudite host of Masterpiece Theatre. But that incarnation did not begin until 1971. Long before that, Cooke had established himself as a print and broadcast journalist commentator, specializing n helping his native citizenry understand their rebellious and remarkable colonies of long-ago. Cooke arrived in the U. S. in 1932 not to become a journalist, but rather to study theater at Yale. Nobody, including Cooke, realized then that America would become his adopted home for the rest of the century, and that he would become its interpreter to a significant part of the world. Journalists are usually outsiders, dependent on what insiders will tell them. That means biographies of journalists are difficult to write compellingly, because the subjects are rarely primary actors. Clarke's accounts of how outsider Cooke did, and did not, cover the administrations of various U.S. presidents are, for the most part, stultifying. Clarke is more successful when examining Cooke's personal life. He discusses nothing scandalous or even lewd, but there are moments of insight, such as the 20-something budding intellectual adopting the name "Alistair" to substitute for the Alfred chosen by his parents; his inability to deal sensibly with money, whether poor or relatively wealthy and his occasionally tense family life. (Nov.)
Copyright 2000 Reed Business Information, Inc.