Items related to Master Control Genes in Development and Evolution:... 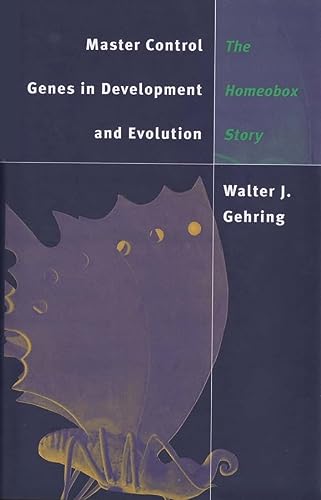 In this fascinating book, one of the world’s most eminent developmental biologists discusses some of the exciting new insights into how genes control development. Walter Gehring describes in vivid detail his essential contributions to the landmark discovery of the homeobox, a characteristic DNA segment found in the genes of all higher organisms from the fruitfly to humans, and he explains how this has provided the key to our modern understanding of development and evolution. The book thus becomes not only a lucid discussion of genetics but also an engaging description of the art of scientific investigation.

Gehring begins his story by looking at the work of the many researchers who laid the foundation for the fields of molecular, cellular, and developmental biology, providing insightful vignettes of past and present investigators. He then describes his laboratory’s hunt for the gene that caused odd mutations in the fruitfly―in which, for example, antennae on the head were transformed into legs. He explains that researchers eventually found that the same master control genes that dictate the body plan in flies also pattern human bodies, limbs, hands, heart, and brain. And he illustrates the universality of the genetic control of development by describing the development of the eye; eyes as different as those of humans, squids, and flies, he shows, develop under the same master control gene.

Walter J. Gehring is professor in the department of cell biology at the University of Basel, Switzerland. He recently shared the March of Dimes Prize for research in developmental biology.

Many developmental biologists and geneticists have enjoyed reading the literature on the work of Walter Gehring's laboratory. It was thus a great pleasure to peruse a book detailing the behind-the-scenes story of Gehring's seminal contributions to our understanding of homeobox proteins. The most fascinating aspect of Master Control Genes in Development and Evolution is Gehring's genuine amusement with science, embellished by intriguing stories about his colleagues. The scientific information is plainly presented and basic, so that even those who are unfamiliar with developmental genetics can understand it.

There is a long history of studies of homeotic transformation in drosophila, dating back to the isolation of the bithorax gene mutation by Calvin Bridges in 1915. Gehring started his laboratory in the late 1970s, when molecular genetics was coming into vogue and the new techniques of this field could be applied to understanding transformation. His contributions are many, including the discovery of the antennapedia homeobox gene and an understanding of the structure of homeoproteins. He also created a tractable genetic system using the fly, developing some of the important tricks of the trade: heat-shock promoters, enhancer traps, and lacZ cell-lineage analysis. More recently, he discovered similarities between the mammalian homeoprotein PAX6 and the drosophila eyeless gene, demonstrating a similar evolution of eyes among divergent invertebrate and vertebrate species. The chronicle of these discoveries as they occurred during the 1980s and early 1990s was extremely interesting for those of us who had read Gehring's papers. Gehring is also gracious and credits others for their contributions to the field.

A unique and delightful aspect of this book deals with Walter Gehring's mind. He is clearly an exceptionally smart person, driven by an intense intrinsic curiosity about biology. Yet he describes the humanistic features of scientific inquisitiveness: examining why things fly, tracking the migration of birds by radar, and even looking at the toes of a person sitting next to him in an airplane, trying to evaluate whether they have a homeotic transformation.

The relationship between students and mentors is another theme of this book. Gehring takes us through his development as a student of Ernst Hadorn and relates his appreciation of his mentor. This experience clearly influences Gehring's dealings with his own postdoctoral fellows and graduate students. Gehring presents difficult but informative experiments to those in his laboratory, and despite the many reasons for potential failure, his premonitions are borne out with successful experiments. He tells a story of the way in which luck can enter into science: the discovery of the eyeless gene began as a band on a gel used as a control for another experiment.

This book is a testament to the will of Gehring, who was so fascinated by biology that he developed the molecular genetics of the drosophila system to further our understanding of embryogenesis, patterning, and disease. Through this book on homeotic transformation, he has transformed our thoughts regarding the process of discovery. Gehring has a fascination with the press and muses about the crazy titles of newspaper articles describing his work. When the eyeless gene was found to induce eyes in locations where eyes do not normally form, The New York Times published a front-page article entitled, "With New Fly, Science Outdoes Hollywood." With this book, I believe that Gehring has earned the title, "Master of the Master Control Genes."

Reviewed by Leonard Zon, M.D.
Copyright © 1999 Massachusetts Medical Society. All rights reserved. The New England Journal of Medicine is a registered trademark of the MMS.