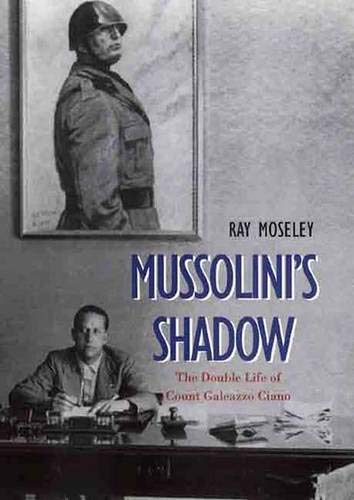 Married to Benito Mussolini's favorite daughter Edda, Galeazzo Ciano was a brilliant, ambitious and ruthless young Italian. Throughout his period in office Ciano kept a diary so detailed and revealing that both Mussolini and Hitler sought to impound and destroy it. The diary was smuggled out of Italy by Edda, who sought unsuccessfully to trade it for Ciano's life. The diary was later acquired by the American spy, Allen W. Dulles (later head of the CIA) and published in full in the Chicago Daily News. It remains one of the classic insider accounts of the workings of the Fascist and Nazi governments. Ciano's glamorous, violent, and promiscuous life was acted out at the highest levels of European politics and society. There has never been a biography of him in English: this is one gripping read.

Ray Moseley is chief European correspondent for the Chicago Tribune. He has lived in Europe for many years, including five years in Rome, and he was runner-up for the Pulitzer Prize in international reporting in 1981.

A lively account of the life of Galeazzo Ciano, fascist Italys Foreign Minister and Mussolini's son-in-law. Bred in aristocratic circles, Ciano was raised in the nationalistic milieu of his fascist father, Costanzo Ciano, a veteran of the March on Rome. The younger Ciano rose through the diplomatic ranks rapidly, married Edda Mussolini in 1930, and was appointed Foreign Minister by the Duce in 1936. Ciano aped the bombastic speech and devil-may-care antics of his father-in-law, whom he greatly admired. He was a captain in the Italian Air Force and participated in bombing raids in the Italo-Ethiopian War, the Spanish Civil War, and the 1940 Greek Campaign. Although he acted as a restraint on the Duce at times, Ciano was largely responsible for the fiasco in Greece (where the Italian army was embarassed by the staunch resistance of tough Greek troops). Italian losses were considerable, and shortly after the Greeks pushed the Italians back into Albania, Hitler sent German divisions to the aid of Italy. Ciano's Janus-like relationship with the Germans is discussed at length: he could never quite resolve his disgust at the barbarity of the ``Huns,'' as he called them, but he risked his life and that of his country in the Pact of Steel alliance with Nazi Germany in the hope of sharing in the spoils of war. His relationship with Mussolini strained over time. He was instrumental in the Fascist Grand Council's vote of no confidence in the Duce, which led to King Victor Emmanuel III's removal and arrest of the dictator. Arrogant and foolish to the end, Ciano fled to Germany, of all places, despite his fear of the Nazis. There he was handed over to the fascists and put to death by Mussolini's Italian Social Republic in January 1944. In general, Moseley weaves a good biographical narrative, but there is a tendency to rely too much on the testimony of participants (such as Ciano's diaries and Edda's memoirs). Events and interpretations are not always weighed by documentary evidence nor placed within the larger diplomatic context. A highly readable life, leaving room for the work of other biographers. (26 b&w photos) -- Copyright ©2000, Kirkus Associates, LP. All rights reserved.

Book Description Yale University Press, 1999. Rilegato. Condition: nuovo. Brand New. Married to Benito Mussolini's favorite daughter Edda, young Count Galeazzo Ciano (1903-44) became il Duce's confidant, emissary, and heir apparent in the years preceding World War II. Appointed foreign minister in 1936, Ciano played a central role in the Axis partnership negotiations with Hitler and von Ribbentrop and masterminded Italy's invasions of Albania and Greece. But Ciano came to disagree with his father-in-law over Italy's partnership with Germany, and he joined with other dissident Fascists plotting to remove Mussolini from office. Ciano was found guilty of treason and, despite desperate attempts to trade his sensational diaries for his life, was shot. This is the first biography of Ciano in English, and it is based in part on those diaries, smuggled by Edda out of the country in her own dramatic escape. Mussolini's Shadow peels away much of the mystery of the Fascist era, provides an eye-opening account of the ruling figures of Germany and Italy, and offers a close-up view of the daily workings of Mussolini's regime. Count Ciano's story is that of a highly intelligent man - but one also frivolous, arrogant, and overbearing - whose short life, was characterized by espionage, intrigue, sexual scandal, assassination, and the abuse of power. As a leading player in Italy's alliance with Germany, Ciano gambled disastrously with his own fate and with that of his country., Ill. bn: 20 b/w illustrations, Ill. colori: --, Peso: 725 gr. Seller Inventory # 4050-BB04