Items related to Rethinking the Holocaust 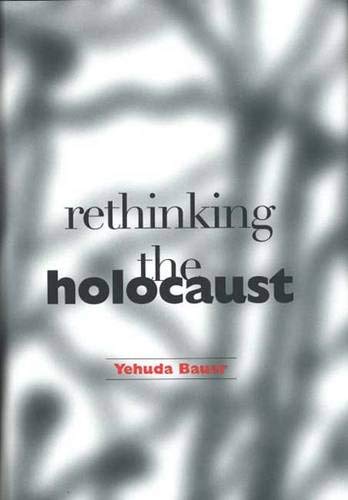 In this work, historian Bauer, former director of the International Institute for Holocaust Research, Yad Vashem, Jerusalem, and now its academic advisor, does not intend to write another history of the Holocaust, but rather seeks to "rethink categories and issues that arise out of the contemplation of that watershed event in human history" (from his introduction). He looks at the causes of the Holocaust, compares it with other genocides, looks at various overall interpretations, and discusses such topics as Jewish resistance, the problem of gender, rescue attempts, and the state of Israel. His 1998 speech to the Bundestag is appended. Annotation c. Book News, Inc., Portland, OR (booknews.com)

Yehuda Bauer, one of the world's premier historians of the Holocaust, here presents an insightful overview and reconsideration of its history and meaning. Drawing on research he and other historians have done in recent years, he offers fresh opinions on such basic issues as how to define and explain the Holocaust; whether it can be compared with other mgenocides; how Jews reacted to the murder campaign against them; and what the relationship is between the Holocaust and the establishment of Israel.The Holocaust says something terribly important about humanity, says Bauer. He analyzes explanations of the Holocaust by Zygmunt Bauman, Jeffrey Herf, Goetz Aly, Daniel Goldhagen, John Weiss, and Saul Friedländer and then offers his own interpretation of how the Holocaust could occur. Providing fascinating narratives as examples, he deals with reactions of Jewish men and women during the Holocaust and tells of several attempts at rescue operations. He also explores Jewish theology of the Holocaust, arguing that our view of the Holocaust should not be clouded by mysticism: it was an action by humans against other humans and is therefore an explicable event that we can prevent from recurring.

"In this original and compelling book Bauer considers all the major issues of Holocaust historiography. Everything Bauer touches he illuminates."—Michael Berenbaum "Eloquent. . . . An eye-opening synthesis of the whole historiography of the Shoah. . . . The meat of the book is a brilliant review of vexed issues like Jewish resistance (armed and unarmed), the role of the Judenräte, or Nazi-imposed Jewish Councils, and the plans to rescue Jews by buying their freedom. . . . With the skill of a sleuth and the assiduous patience of a born scholar, Bauer reconstructs the schemes, characters and motives in a spirit of factual inquiry, keen empathy and, of all unlikely things, common sense."—Morris Dickstein, New York Times Book Review