Items related to Menzel's Realism: Art and Embodiment in Nineteenth-Centu... 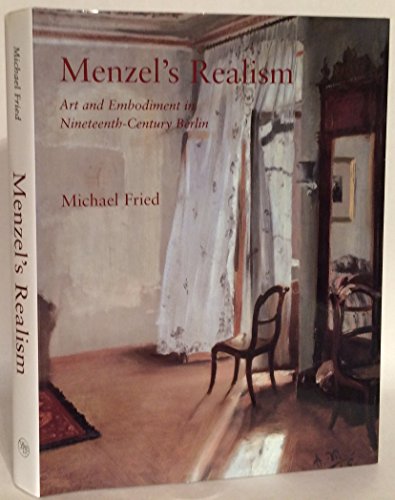 Adolf Menzel was one of the most important German artists of the nineteenth century, yet he is scarcely known outside his native land. In this book a leading art historian argues that Menzel deserves to be recognized not only as one of the greatest painters and draftsmen of his century but also as a master realist whose work engages profoundly with an extraordinary range of issues-artistic, scientific, philosophical, sociopolitical. Michael Fried has written the first book in English to explore Menzel's large and fascinating oeuvre, and in so doing has made the artist's stupendous achievement accessible to a wide audience at last.

Fried compares Menzel's art to that of the nineteenth century's two other great realist painters, Courbet and Eakins. Analyzing paintings, drawings, and prints from all stages of Menzel's long career, he asserts that the distinctive quality of Menzel's realism is found in his concern with evoking the multi-sensory, fully embodied relationships of persons with the universe of physical objects, tools, and situations. Establishing connections between Menzel's work and a broad array of extra-artistic contexts, Fried has created a work of compelling originality, one that for the first time establishes Menzel as a key artist of modernity.

Michael Fried is J. R. Herbert Boone Professor of Humanities and director of the Humanities Center at the Johns Hopkins University. He is the author of various books of art criticism, art history, and poetry, including Manet's Modernism, or, The Face of Painting in the 1860s; Art and Objecthood: Essays and Reviews; and To the Center of the Earth (poems).