Items related to Prokofiev--A Biography: From Russia to the West 1891-1935 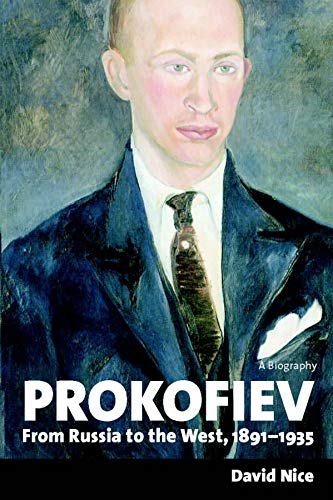 This book, the first in-depth biography of Prokofiev since 1987 and the most detailed yet written, is based on fresh discoveries and new archival material.

Since 1991—the year that marked both the fall of the Soviet Union and the centenary of Sergey and birth—a new assessment of the renowned composer's life and work has become both possible and necessary.  In this engrossing book, David Nice draws on a remarkable range of previously unexamined sources to present that reassessment. The book follows Prokofiev's personal and musical progression from his childhood on a Ukrainian country estate to the years he spent traveling in America and Europe as an acclaimed interpreter of his own works.  Nice sheds new light on Prokofiev's early years at the St. Petersburg Conservatoire, his departure from Russia in 1918 for what he thought would be a short tour of America, and his marriage and family relationships.  He considers the music of Prokofiev's years in the west (long dismissed by Soviet musicologists as decadent work weakened by the composer's absence from the motherland), moving from the lyricism of his St. Petersburg years to the fresh simplicity of his early Soviet scores.  Nice also examines the complex reasons which led Prokofiev to move his family to the Soviet Union in 1936.  A second volume will cover Prokofiev's life from this period to his death in 1952.

David Nice is a writer, broadcaster, and lecturer on music, and author of books on Elgar, Tchaikovsky, and Richard Strauss.

This book, the first in-depth biography of Prokofiev since 1987 and the most detailed yet written, is based on fresh discoveries and new archival material.