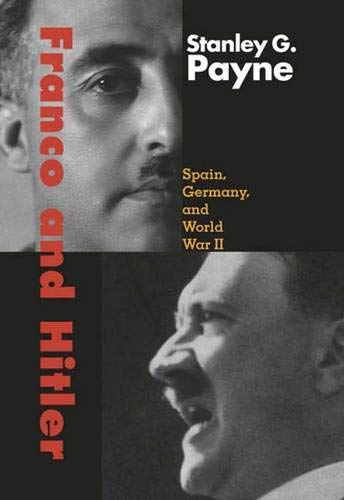 Was Franco sympathetic to Nazi Germany? Why didn't Spain enter World War II? In what ways did Spain collaborate with the Third Reich? How much did Spain assist Jewish refugees?

This is the first book in any language to answer these intriguing questions. Stanley Payne, a leading historian of modern Spain, explores the full range of Franco’s relationship with Hitler, from 1936 to the fall of the Reich in 1945. But as Payne brilliantly shows, relations between these two dictators were not only a matter of realpolitik.  These two titanic egos engaged in an extraordinary tragicomic drama often verging on the dark absurdity of a Beckett or Ionesco play.

Whereas Payne investigates the evolving relationship of the two regimes up to the conclusion of World War II, his principal concern is the enigma of Spain’s unique position during the war, as a semi-fascist country struggling to maintain a tortured neutrality. Why Spain did not enter the war as a German ally, joining with Hitler to seize Gibraltar and close the Mediterranean to the British navy, is at the center of Payne’s narrative. Franco’s only personal meeting with Hitler, in 1940 to discuss precisely this, is recounted here in groundbreaking detail that also sheds significant new light on the Spanish government’s vacillating policy toward Jewish refugees, on the Holocaust, and on Spain’s German connection throughout the duration of the war.

Stanley G. Payne is Hilldale-Jaume Vicens Vives Professor of History Emeritus, University of Wisconsin–Madison. He is a world authority on the history of European fascism and is the author of many books on Spanish and modern European history, including The Spanish Civil War, the Soviet Union, and Communism and The Collapse of the Spanish Republic, 1933–1936, both published by Yale University Press. He lives in Madison, WI.

“Stanley Payne is recognized as the most serious and informed foreign historian of modern Spain in a whole range of areas. Here he deals with a subject of considerable debate and makes a major contribution to European and Spanish history.”—Juan Linz, Yale University
(Juan Linz)

"Stanley Payne has written an excellent study of the relations between Franco and his regime and the Germans during the years of the civil and world wars. Much of what he writes has been known in outline for a long time. But Payne has brought together the result of the latest research on this thorny topic to our great benefit, in a fascinating book."—Hugh Thomas
(Hugh Thomas)

“Franco and Hitler is the crowning achievement of Payne’s work which includes an impressive number of studies of Spain 1931-1945, a complex subject matter of which he is now the outstanding non-Spanish historian.”—John Lukacs
(John Lukacs)

"An excellent account of the Franco government during World War II and its relationship with Hitler’s Germany. It deserves praise because it tells in a clear and engaging fashion a very compelling story. As a study of Franco's relationship with Hitler, Payne's work is simply unmatched."—Geoffrey Jensen, author of Franco: Soldier, Commander, Dictator (Geoffrey Jensen)

"Franco and Hitler shatters many myths, especially those fostered by the Franco regime, concerning Spain's role in the conflict. It is compelling, iconoclastic, and insightful."—Michael Seidman, author of Republic of Egos: A Social History of the Spanish Civil War
(Michael Seidman)

Book Description Hardcover. Condition: New. Attempts to answer many questions about Spain and Franco's relationship with the Nazi regime. Was he sympathetic to the Nazis? Why didn't Spain enter World War Two? In what ways did Spain collaborate with the Third Reich? To what extent did Spain assist Jewish refugees? Informed and insightful. Seller Inventory # 9780300122824