Items related to The Myth of American Exceptionalism

The Myth of American Exceptionalism 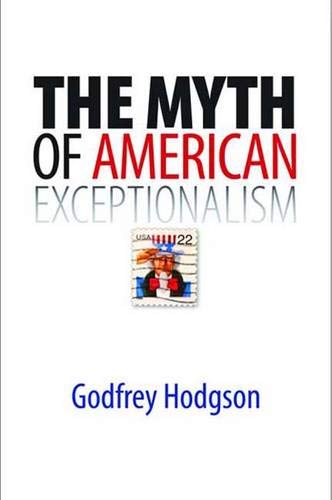 The idea that the United States is destined to spread its unique gifts of democracy and capitalism to other countries is dangerous for Americans and for the rest of the world, warns Godfrey Hodgson in this provocative book. Hodgson, a shrewd and highly respected British commentator, argues that America is not as exceptional as it would like to think; its blindness to its own history has bred a complacent nationalism and a disastrous foreign policy that has isolated and alienated it from the global community.

Tracing the development of America’s high self regard from the early days of the republic to the present era, Hodgson demonstrates how its exceptionalism has been systematically exaggerated and—in recent decades—corrupted. While there have been distinct and original elements in America’s history and political philosophy, notes Hodgson, these have always been more heavily influenced by European thought and experience than Americans have been willing to acknowledge.

A stimulating and timely assessment of how America’s belief in its exceptionalism has led it astray, this book is mandatory reading for its citizens, admirers, and detractors.

Godfrey Hodgson is a Fellow at the Rothermere American Institute, University of Oxford. He lives in Oxfordshire, UK.

"The idea of 'American exceptionalism,' once a concept dear to the sectarian Left, long ago evolved into a shibboleth of the Republican Right. Godfrey Hodgson has trained his formidable intelligence against the second of these—and written a provocative exploration of American history as well as American myth."—Sean Wilentz, Princeton University

“Some of Hodgson’s historical judgments warrant challenge, but this timely and deeply felt, independent-minded polemic offers powerful evidence that a belief in American exceptionalism hinders clear thinking about the nation and world.”—Thomas Bender, author of A Nation Among Nations: America’s Place in World History (Thomas Bender)

“A brilliant history, from the Puritans to the present, of our belief in our exceptionalism—political, economic, and moral—and how it has lately come to support inequality and hubris.”—Walter Nugent, author of Habits of Empire: A History of American Expansion
(Walter Nugent)

"Godfrey Hodgson has always been a sympathetic and insightful friend of the United States.  This is what makes his dismay toward those who use the idea of American innocence to project American power so compelling."—Alan Wolfe, author of The Future of Liberalism  (Alan Wolfe)

“This survey is informed by Hodgson’s wide learning and powerful sense that Americans are somewhat deluded in their reading of their national experience as exceptional and have allowed that belief to warp their interactions with the world.”—Mark Lytle, Bard College (Mark Lytle)

“[The Myth of American Exceptionalism] is interesting and lucid as it examines the errors and exaggerations in the national self-image.” - Clive Cook, Financial Times (Clive Cook Financial Times 2009-03-16)

"Godfrey Hodgson provides readers with a grand tour through American history that offers a friendly but stern hand to explain our sense of exceptionalism in the world."  —America (America 2009-07-06)

1. The Myth of American Exceptionalism

2. The Myth of American Exceptionalism

3. The Myth of American Exceptionalism

4. The Myth of American Exceptionalism