Items related to The Bride and the Dowry: Israel, Jordan, and the Palestinian...

Raz, Avi The Bride and the Dowry: Israel, Jordan, and the Palestinians in the Aftermath of the June 1967 War

The Bride and the Dowry: Israel, Jordan, and the Palestinians in the Aftermath of the June 1967 War 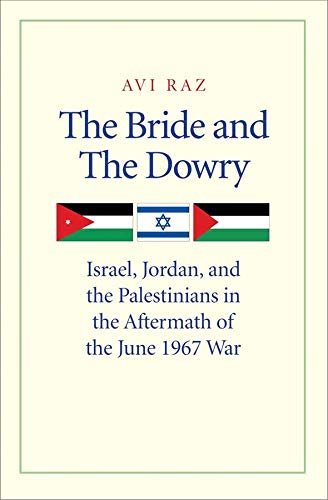 Israel’s victory in the June 1967 Six Day War provided a unique opportunity for resolving the decades-old Arab-Zionist conflict. Having seized the West Bank, the Gaza Strip, the Sinai Peninsula, and the Golan Heights, Israel for the first time in its history had something concrete to offer its Arab neighbors: it could trade land for peace. Yet the political deadlock persisted after the guns fell silent. This book asks why.

Avi Raz places Israel’s conduct under an uncompromising lens. His penetrating book examines the critical two years following the June war and substantially revises our understanding of how and why Israeli-Arab secret contacts came to naught. Mining newly declassified records in Israeli, American, British, and United Nations archives, as well as private papers of individual participants, Raz dispels the myth of overall Arab intransigence and arrives at new and unexpected conclusions. In short, he concludes that Israel’s postwar diplomacy was deliberately ineffective because its leaders preferred land over peace with its neighbors. The book throws a great deal of light not only on the post-1967 period but also on the problems and pitfalls of peacemaking in the Middle East today.

Avi Raz is a member of the faculty of Oriental studies, University of Oxford, research associate at Oxford’s Centre of International Studies, and research fellow at Wolfson College, Oxford.

'The story of Israeli policy in the late 1960s has been told before...But no one has provided as thorough - or as damning - an account as Avi Raz, a former reporter for Ma'ario who has read every pertinent document in every available archive, in Hebrew, Arabic and English. The Bride and the Dowry is a work of meticulous scholarship'—Adam Shatz, London Review of Books (Adam Shatz London Review of Books 2012-10-11)

'Received wisdom has it that an opportunity to reach a settlement between Israel and the Arabs was missed in the weeks and months following the turmoil of the 1967 war.This excellent book shows that indeed it was - and it wasn't. The author presents a meticulously researched study, using mainly primary sources, of how this window appeared to open briefly but in reality remained closed.'—Asian Affairs (Asian Affairs 2014-03-01)

'Avi Raz’s scholarship is outstanding in its rigour. This book presents an exceptionally thorough and rich exploration of the aftermath of the 1967 war, focusing on the Palestinian refugee question. By grounding present political debates and diplomatic dilemmas in solid historical research, it enables deep and incisive understanding of the options available to the Israeli government at the time and of the particular paths it subsequently took. This is a ground-breaking and potentially conclusive contribution to a longstanding and contentious debate.'—Yezid Sayigh, author of Armed Struggle and the Search for State: The Palestinian National Movement 1949– 1993

'This is an original, meticulously researched and highly readable study of Israel's consolidation of its hold on the territories it occupied during the war of 1967. Raz traces in persuasive detail the ways in which the military campaign and the new opportunities it opened up were variously interpreted and exploited by Palestinians, by the Israeli government and by the Jordanian authorities. He makes extraordinarily good use of Israeli, American and British archival material to create a substantial and reliable account of the formative first couple of years of military occupation, the paths not taken and the slow destructive consequences of decisions made in the first flush of victory. This allows him to enliven the study with the voices of the main protagonists, capturing their beliefs about what was possible—some of which were realized, often with perverse and troubling consequences. In doing so, Raz is to be congratulated for providing not only a fascinating historical account of these years, but also a profound reflection on the costs of victory not simply for the defeated, but, as the past four decades have shown, for the victors as well.'—Charles Tripp, School of Oriental and African Studies, University of London

“A scouring academic investigation of the fallout from the Six-Day War. . . Raz delivers a compelling study of Israeli intransigence and deception after the huge territory gains it made in June 1967 by seizing the West Bank and Arab Jerusalem, the Golan Heights, the Sinai Peninsula and the Gaza Strip . . . A scrupulously researched work likely to open deep old wounds.”—Kirkus Reviews (Kirkus Reviews)

"Avi Raz offers a meticulous and incisive analysis of the archival record of early Israeli-Palestinian-Jordanian contacts and the dismaying conclusion that Israeli willingness to negotiate from a position of strength is not necessarily the path to peacemaking but an alternative to it."—Gershon Shafir, co-editor of Struggle and Survival in Israel and Palestine (Gershon Shafir)

"Avi Raz's excellent work is an essay on the politics of immobilism and faits accomplis of Israel's leaders in the wake of the 1967 war. This is an indispensable study for our understanding of how and why Israel got trapped in the tragic connundrum of a continuous occupation of Palestinian lands instead of using its military supremacy to change the nature of its relations with the Arab world." —Shlomo Ben-Ami, former foreign minister of Israel; Vice President, Toledo International Centre for Peace (CITpax), and author of Scars of War, Wounds of Peace: The Israeli-Arab Tragedy

"This book is a milestone in scholarship on Israel’s foreign policy. Avi Raz uses the full panoply of primary sources in all the relevant languages to brilliantly illuminating effect. He also succeeds in weaving together his wide-ranging archival trawling into a fascinating narrative. And he argues compellingly that in the aftermath of the June 1967 War, Israel’s leaders preferred territorial expansion to peace with their Arab neighbours."—Avi Shlaim, author of The Iron Wall: Israel and the Arab World and Lion of Jordan: King Hussein's Life in War and Peace (Avi Shlaim)

1. The Bride and the Dowry: Israel, Jordan, and the Palestinians in the Aftermath of the June 1967 War

2. The Bride and the Dowry: Israel, Jordan, and the Palestinians in the Aftermath of the June 1967 War

3. The Bride and the Dowry: Israel, Jordan, and the Palestinians in the Aftermath of the June 1967 War

4. The Bride and the Dowry: Israel, Jordan, and the Palestinians in the Aftermath of the June 1967 War