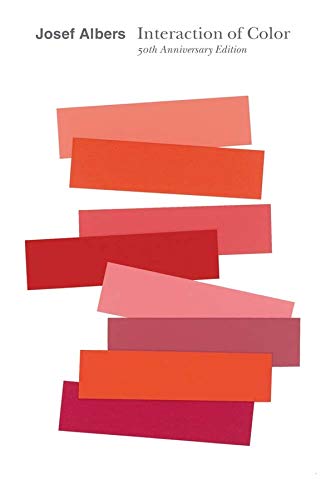 The 50th anniversary edition of a classic text, featuring an expanded selection of color studies

Josef Albers’s Interaction of Color is a masterwork in art education. Conceived as a handbook and teaching aid for artists, instructors, and students, this influential book presents Albers’s singular explanation of complex color theory principles.

Originally published by Yale University Press in 1963 as a limited silkscreen edition with 150 color plates, Interaction of Color first appeared in paperback in 1971, featuring ten color studies chosen by Albers, and has remained in print ever since. With over a quarter of a million copies sold in its various editions since 1963, Interaction of Color  remains an essential resource on color, as pioneering today as when Albers first created it.

Fifty years after Interaction’s initial publication, this new edition presents a significantly expanded selection of close to sixty color studies alongside Albers’s original text, demonstrating such principles as color relativity, intensity, and temperature; vibrating and vanishing boundaries; and the illusion of transparency and reversed grounds. A celebration of the longevity and unique authority of Albers’s contribution, this landmark edition will find new audiences in studios and classrooms around the world.

Josef Albers, one of the most influential artist-educators of the twentieth century, was a member of the Bauhaus group in Germany during the 1920s. In 1933 he came to the United States, where he taught at Black Mountain College for sixteen years. In 1950 he joined the faculty at Yale University as chairman of the department of design. Albers was elected to the National Institute of Arts and Letters in 1968 and was professor emeritus of art at Yale until his death in 1976. Nicholas Fox Weber is executive director of the Josef and Anni Albers Foundation.

"One of the most beautiful books in the world. . . . Interaction of Color is not solely for artists, though generations of them certainly owe Albers a debt. It is for anyone who wants to get under the hood and understand why and how we see the world the way we do. . . . A visionary work."—Malcolm Jones, Newsweek
"The best introduction to Albers's work―Albers's own Interaction of Color, which I highly recommend."―New York Magazine
"Will a paperback version preserve the original value of Albers' text? . . . The answer is an enthusiastic yes, for here is a book which belongs in the studio and classroom that for years has been available only in the best university."―Arts Review
"The most comprehensive and intelligent . . . book we have yet on this subject. It is an indispensable volume for the artist, architect, or teacher who finds a greater challenge in discovery than in a 'safe' color system."—Architectural Forum
"One of the most influential artist-teachers of the century, Albers is best known for his squares—a geometric form to which he has been 'paying homage' throughout the years. . . . Interaction of Color is a record of an experimental way of studying and teaching color. . . . What he says will be useful in any kind of painting."—American Artist
"This handbook for artists, teachers, and students, by one of modernism's great artists and thinkers, has been expanded to include nearly 60 color studies."—DWELL
"For the historical insight and lucidity our color-drenched era could definitely use, the 50th-anniversary edition of Interaction of Color, by the Bauhaus-bred artist and teacher Josef Albers, is especially worth examining."—Sebastian Smee, Atlantic
Selected as a 2007 AAUP University Press Book for Public and Secondary School Libraries
"Interaction of Color with its illuminating visual exercises and mind-bending optical illusions, remains an indispensable blueprint to the art of seeing. . . . An essential piece of visual literacy."—Maria Popova, Brain Pickings
"Joseph Albers, an artist and greatest educator in the United States, is one of those who first tore down the old hierarchical concept of color."—Yusuke Nakahara, Color Planning Center No. 59
"The text of Interaction of Color provides the careful reader with the content of Josef Albers' famous color course. His teaching is based on learning by direct perception, not by theories or color systems. There are many books on color on the market, but no one combines eyesight with such profound insight as Josef Albers does in Interaction of Color."―Hannes Beckmann
"[An] influential classic [that] has inspired artist and designers everywhere."—CoolHunting
"One of the most important books on color ever written."—Michael Hession, Gizmodo

Interaction of Color (Paperback or Softback)