Items related to Poilu: The World War I Notebooks of Corporal Louis... 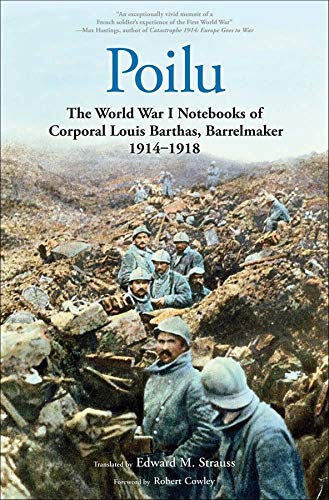 Along with millions of other Frenchmen, Louis Barthas, a thirty-five-year-old barrelmaker from a small wine-growing town, was conscripted to fight the Germans in the opening days of World War I. Corporal Barthas spent the next four years in near-ceaseless combat, wherever the French army fought its fiercest battles: Artois, Flanders, Champagne, Verdun, the Somme, the Argonne. Barthas’ riveting wartime narrative, first published in France in 1978, presents the vivid, immediate experiences of a frontline soldier.

This excellent new translation brings Barthas’ wartime writings to English-language readers for the first time. His notebooks and letters represent the quintessential memoir of a “poilu,” or “hairy one,” as the untidy, unshaven French infantryman of the fighting trenches was familiarly known. Upon Barthas’ return home in 1919, he painstakingly transcribed his day-to-day writings into nineteen notebooks, preserving not only his own story but also the larger story of the unnumbered soldiers who never returned. Recounting bloody battles and endless exhaustion, the deaths of comrades, the infuriating incompetence and tyranny of his own officers, Barthas also describes spontaneous acts of camaraderie between French poilus and their German foes in trenches just a few paces apart. An eloquent witness and keen observer, Barthas takes his readers directly into the heart of the Great War.

Louis Barthas (1879–1952) was a cooper in a small town in southern France. Edward M. Strauss is a fundraising director in higher education and former publisher of MHQ: The Quarterly Journal of Military History. He lives in New York City.

"Corporal Barthas saw four years of near-constant fighting in some of the largest and deadliest actions of the war (and of all time). The fact of his survival is unlikely enough, but he also set down everything that he saw and experienced in a series of notebooks, with no deficit of insight, opinion, or literary flair. His description of the meat-grinder of trench warfare is visceral, but he saves most of his venom for those in command. One of the most readable and indispensable accounts of the death of the glory of war." —The Daily Beast, "Hot Reads"

"With the 100th anniversary of the start of WWI, these reports from the trenches -- translated to English for the first time -- should relieve readers of any notion of the glory of war. Drafted at 35, the French soldier spent four years in near constant combat at Flanders, Verdun, the Argonne and other deadly battlefronts. An example of what went on: 'Lapeyre was badly wounded in the leg. A shell fragment had sliced off, as neatly as a pastry slicer, a piece of his calf as big as a chestnut, and the blood poured out like a fountain.' " —New York Post, "Must Reads".

“This translation of the diaries and letters of a French corporal on the Western front in World War I brings the gritty reality of trench warfare to an English-speaking audience in a manner unparalleled even in the best soldier writings from that war. The reader feels and smells and hears the mud, the blood, the fear, the deafening noise of exploding shells, the clatter of machine guns, the cries of the wounded and dying.  Here is the war as the men in the trenches experienced it.”—James McPherson, author of Battle Cry of Freedom

"A century after the guns of August first boomed, World War I has lost none of its power to boggle the mind. . . . Louis Barthas, an enlisted man from southwestern France, managed to reduce the conflict to human scale with a pen and 19 notebooks. . . . With Edward M. Strauss’s translation of Poilu, English-language readers now have access to a classic account of the war, a day-to-day chronicle of life in the trenches and a richly detailed answer to the seemingly unanswerable question: What was it like?"—William Grimes, New York Times

"Nothing ever written provides a more accurate, raw and close-in account of the beastly life of the common soldier..."—Marc Wortman, The Daily Beast

“Barthas was an ordinary working man, a barrel maker of socialist inclinations, and there was nothing about him to suggest he harbored literary gifts or genius. But his notebooks, assembled under the title Poilu, are among the great works of the war, deserving a place of mention with memoirs like Guy Chapman’s A Passionate Prodigality and Ernst Jünger’s Storm of Steel.” —Geoffrey Norman, The Wall Street Journal

“An exceptionally vivid memoir of a French soldier's experience of the First World War.”—Max Hastings, author of Catastrophe 1914: Europe Goes to War

“Louis Barthas, cooper, citizen, cynic and reluctant reservist, is one of the truly authentic voices of the Great War. A classic in France from its first publication, his account of the fighting (and he saw more of it than most) speaks not only for the 'poilu' but for all solders of the conflict.”—Hew Strachan, author of The First World War

"A revelatory book that brings the French experience of the Great War to life as you read. However much we may think the British and Americans suffered, their agony was shorter and less intense than the tragedy that overwhelmed the French nation in 1914-1918."—Peter Hart, author of The Great War: A Combat History of the First World War

“Ah, the notebooks of Louis Barthas! This book has profound historic value. It is also a genuine work of literature.”—François Mitterrand, former president of France