Items related to Lord Strange's Men and Their Plays

Lord Strange's Men and Their Plays 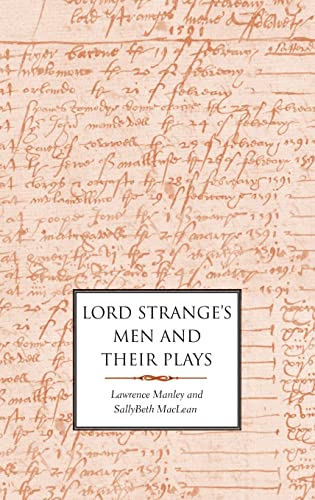 For a brief period in the late Elizabethan Era an innovative company of players dominated the London stage. A fellowship of dedicated thespians, Lord Strange’s Men established their reputation by concentrating on “modern matter” performed in a spectacular style, exploring new modes of impersonation, and deliberately courting controversy. Supported by their equally controversial patron, theater connoisseur and potential claimant to the English throne Ferdinando Stanley, the company included Edward Alleyn, considered the greatest actor of the age, as well as George Bryan, Thomas Pope, Augustine Phillips, William Kemp, and John Hemings, who later joined William Shakespeare and Richard Burbage in the Lord Chamberlain’s Men. Though their theatrical reign was relatively short lived, Lord Strange’s Men helped to define the dramaturgy of the period, performing the plays of Shakespeare, Christopher Marlowe, Thomas Kyd, and others with their own distinctive flourish.

Lawrence Manley and Sally-Beth MacLean offer the first complete account of the troupe and its enormous influence on Elizabethan theater. Seamlessly blending theater history and literary criticism, the authors paint a lively portrait of a unique community of performing artists, their intellectual ambitions and theatrical innovations, their business practices, and their fearless engagements with the politics and religion of their time.

Lawrence Manley is William R. Kenan Jr. Professor of English at Yale University. Sally-Beth MacLean is director of research and general editor of the Records of Early English Drama as well as professor emeritus at the University of Toronto.

"[A] magisterial work. . . . This book may represent an apex of repertory studies, as its authors have succeeded in producing the definitive work in this area thus far. . . . This stimulating work is therefore necessary reading— all the more so because its many fresh documentary discoveries and provocative claims will be debated for decades to come."—Robert Hornback,Renaissance Quarterly
Winner the 2015 Phyllis Goodhart Gordan Book Prize given by the Renaissance Society of America.
“Triumphantly demonstrates once more the value of concentrating on a single company. Patronage, repertory, staging and critical studies blend to bring into sharp focus this exceptional troupe, its enigmatic patron, and its likely place in the career of William Shakespeare.”―Richard Dutton, Humanities Distinguished Professor of English, Ohio State University

“Combining literary and archival evidence, this meticulously researched book shows how and why Lord Strange’s Men―which owned the major plays, players and playwrights of the 1590s―shaped all subsequent early modern drama.”―Tiffany Stern, author of Rehearsal from Shakespeare to Sheridan, Professor of Early Modern Drama, Oxford University

“An original work of sound and exciting scholarship.”―Grace Ioppolo, Director of the Henslowe-Alleyn Digitisation Project

“Lord Strange’s Men and Their Plays is without rival: nothing like it has been attempted before.”―John H. Astington, author of Actors and Acting in Shakespeare's Time

1. Lord Strange's Men and Their Plays

2. Lord Strange's Men and Their Plays

3. Lord Strange's Men and Their Plays

4. Lord Strange's Men and Their Plays

5. Lord Strange's Men and Their Plays

6. Lord Strange's Men and Their Plays