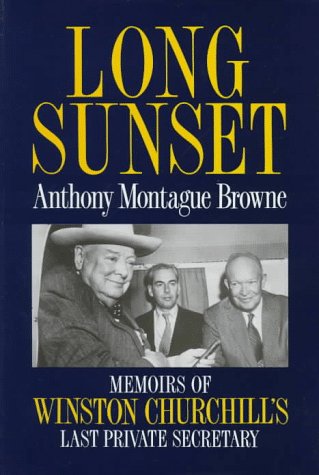 Anthony Montague Browne was a young diplomat in Paris when in 1952 he was seconded to become Private Secretary to Winston Churchill, who in 1951 had returned to 10 Downing Street for his second term as Prime Minister.
Apart from a brief return to the Foreign Office after the Prime Minister's retirement in 1955, he remained with Churchill - as adviser, amanuensis and assistant - until Churchill's death in January 1965. He served as companion on the official foreign visits and the holidays with Max Beaverbrook and Aristotle Onassis, helped with the great literary works, and became his closest intimate as well as speech-writer and spokesman in Churchill's last decade.
Long Sunset describes a rich and varied career. As a young man Anthony Montague Browne fought in the Second World War as a pilot with distinction and was awarded the DFC, and after 1965 he served in the Royal Household.
But it is the figure of Winston Churchill which dominates these memoirs (to which his daughter Mary Soames contributes a Foreword) and as the final member of what he called 'my circle' to have written an autobiography, Anthony Montague Browne represents a last link with the greatest Englishman of the century.

Originally published in England in 1995, this book begins with the author's life before he went to work for Churchill and ends with a brief section on his life afterward. The main portion deals with the years between 1952, when Montague Browne became one of Churchhill's private secretaries, and the latter's death in 1965. The author gives both his own and Churchill's opinions of prominent people and events. In his later years, Churchill's mental and physical activity declined, and few people were as involved in his daily life as the author, who often made the final decisions about what statements should be made in Churchill's name. The author did not keep a diary, which makes some of this work sketchy, but as a different view of Churchill's last years this is sure to be popular with the vast numbers of people interested in the great British leader.?Marilyn Dailey, Natrona Cty. P.L., Casper, Wyo.
Copyright 1997 Reed Business Information, Inc.