Items related to Beaten by the Masters (Master Bridge Series) 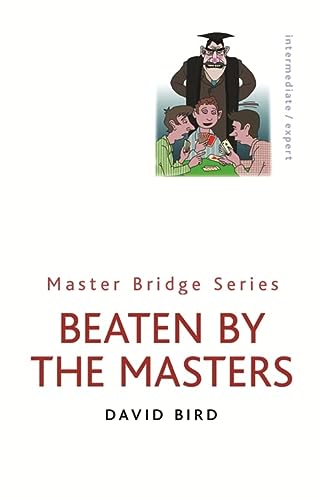 David Bird, known world-wide for his tales of the bridge-crazy monks of St Titus, moves to a hilarious new setting. Bridge is a compulsory subject at Cholmeley school and a host of vibrant characters participate in the action. Madame Baguette, the Senior French mistress, chases any master whose hair is still where it should be. They, meanwhile, turn a roving eye towards Yvonne Guitton, the junior French mistress. And woe betide any unhappy boy (or member of staff) who finds himself partnering the irascible Headmaster.

As with all David Bird's books, it is not just a matter of the readers being convulsed with laughter. The bridge is as brilliant as ever, and by the time the final episode is reached, much sound bridge instruction has been painlessly absorbed. Which is more than can be said for those poor unfortunates caught playing a torch-lit rubber after lights-out.

David Bird is recognised as the world's leading humorous bridge writer. He has written over 130 bridge books, and in the last ten years he has won six 'Book of the Year' awards from the American Bridge Teachers Association - and in 2016 won the International Bridge Press Association Book of the Year Award for The Abbot, the Parrot and the Bermuda Bowl. David contributes regularly to Bridge Magazine, English Bridge, Bridge World, the American Contract Bridge League bulletin and other magazines around the world, as well as Vu-Bridge on the internet. He is also a voice commentator for Bridge Base Online. He lives in Chandlers Ford, Hampshire, England.

Each of David Bird's books features some great bridge, and that tradition carries on here with some good technical points, and a few humorous expeditions into the hinterlands of bridge. Excellent bridge, amusing characters, and some great dialogue make this book a very good choice for a few hours of pleasure.―Bridge Magazine

2. BEATEN BY THE MASTERS (MASTER BR