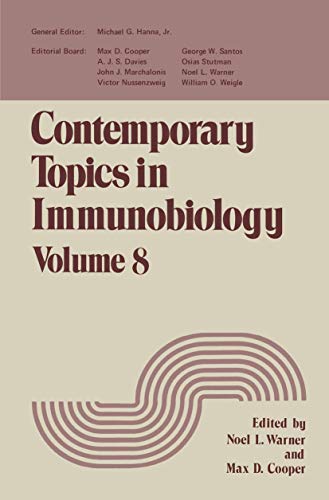 In this current volume of Contemporary Topics in Immunobiology we have chosen to continue with the multiple-theme approach that was developed in Volumes 1, 3, and 5 of this series. Immunobiology still shows little sign of decreasing its active growth rate, but rather is continuing to broaden its range of interests and applications, particularly as new techniques and methods are adapted from other fields of medical research. This present volume reflects both several of the more classical areas of immunology now addressed in the light of contemporary immunology, and several newer directions that have been taken in other fields. The general subject of T-cell heterogeneity and functions of T-cell subpop­ ulations is addressed in Chapters 1 and 2. The potential role of genes of the major histocompatibility complex in controlling the immune functions of T lymphocytes still remains a major unresolved issue in immunogenetics, and the current status of this problem is excellently reviewed by J. F. A. P. Miller. The further elucidation of functional subpopulations of human T lymphocytes has been particularly hampered by the lack of available markers for character­ izing and isolating such sUbpopulations. A major step in this direction has been made by L. Moretta, M. Ferrarini, and M. D. Cooper, who review their ex­ perience with Fc-receptor-bearing human T-Iymphocyte populations.

Book Description Springer, 1978. Condition: Good. 1st Edition. Shows some signs of wear, and may have some markings on the inside. Seller Inventory # GRP70656718

Book Description Springer, 1978. Condition: Good. 1st Edition. Former Library book. Shows some signs of wear, and may have some markings on the inside. Seller Inventory # GRP47867628

Shipping: US$ 18.18
From United Kingdom to U.S.A.
Destination, rates & speeds