Existential-Phenomenological Perspectives in Psychology: Exploring the Breadth of Human Experience, With a Special Section on Transpersonal Psychology

Existential-Phenomenological Perspectives in Psychology: Exploring the Breadth of Human Experience, With a Special Section on Transpersonal Psychology 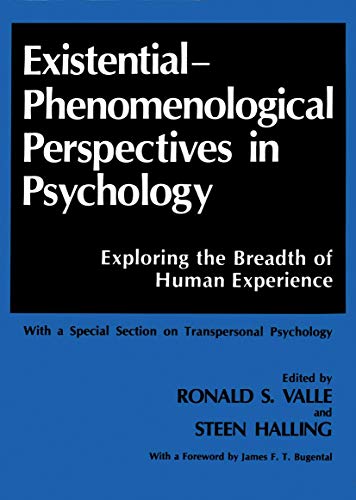 When I began to study psychology a half century ago, it was defined as "the study of behavior and experience." By the time I completed my doctorate, shortly after the end of World War II, the last two words were fading rapidly. In one of my first graduate classes, a course in statistics, the professor announced on the first day, "Whatever exists, exists in some number." We dutifully wrote that into our notes and did not pause to recognize that thereby all that makes life meaningful was being consigned to oblivion. This bland restructuring-perhaps more accurately, destruction-of the world was typical of its time, 1940. The influence of a narrow scientistic attitude was already spreading throughout the learned disciplines. In the next two decades it would invade and tyrannize the "social sciences," education, and even philosophy. To be sure, quantification is a powerful tool, selectively employed, but too often it has been made into an executioner's axe to deny actuality to all that does not yield to its procrustean demands.

1. Existential-Phenomenological Perspectives in Psychology: Exploring the Breadth of Human Experience,

4. Existential-Phenomenological Perspectives in Psychology: Exploring the Breadth of Human Experience, With a Special Section on Transpersonal Psychology