Items related to Fourscore Classics of Music Literature: A Guide to...

Reese, Gustave Fourscore Classics of Music Literature: A Guide to Selected Original Sources on Theory and Other Writings on Music Not Available in English, with ... (Da Capo Press Music Reprint Series)

Fourscore Classics of Music Literature: A Guide to Selected Original Sources on Theory and Other Writings on Music Not Available in English, with ... (Da Capo Press Music Reprint Series) 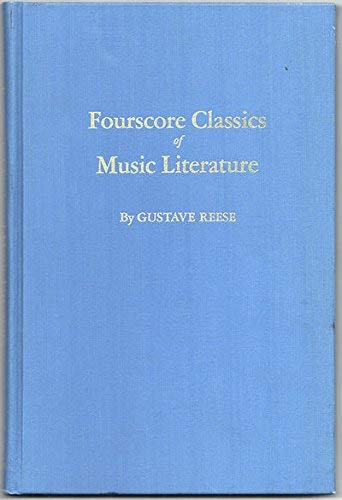 When the Committee on Music and Musicology of the American Council of Learned Societies, desirous of advancing the cause of musicology in the United States and of attracting increased support for it, devised a series of brochures that might partially achieve these objectives, it was impressed by the inadequate availability, in English translation, of source materials, especially of the earlier periods. Many musical treatises (aesthetic, philosophical, technical) remain too long unfamiliar to even the deeply earnest student because of language barriers. How much more difficult is it, then, for the intelligent and interested layman to learn of the major figures who kept the torch of musical learning and speculation burning brightly. In this succinct but comprehensive survey, first published in 1957 by the Liberal Arts Press, of classics in music literature not yet available in English, Reese exposes a wide and provocative vista. His own introduction explains his selections and suggests the challenge these untranslated texts offer to all those who wish to see your discipline prosper. American musicologist and teacher Gustave Reese (1899-1977) attended New York University (LLB 1921, MusB 1930) and taught there, starting in 1927. He also served as visiting professor at a number of American universities including Harvard, Duke, UCLA, USC, Michigan, and CUNY, and gave courses in musicology at The Juilliard School. He was associate editor (1933-44) and then editor (1944-5) of The Musical Quarterly. He was head of the publication department of G. Schirmer (1940-45) and director of publication at Carl Fischer (1945-55), a firm with which he was later connected in an advisory capacity. The sense of indebtedness felt by musicologists to Reese can be seen in the imposing scope and quality of the Festschrift presented to him on his 65th birthday. This indebtedness is still felt: his work, especially his Music in the Renaissance, remains indispensable.