Items related to Iron Coffins: A Personal Account Of The German U-boat... 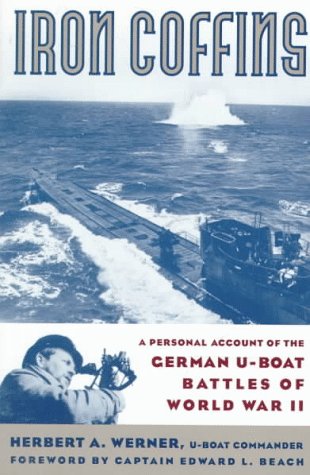 The Battle of the Atlantic was one of the most savage and strategically significant campaigns of World War II: 28,000 out of 39,000 men in the German U-boat force disappeared beneath the waves. Herbert A. Werner, one of the few surviving German U-boat commanders, served on five submarines from 1941 to 1945. From the Atlantic to the Mediterranean, from the English Channel to the North Sea, he takes the reader with him through the triumphant years of 1941 and 1942, when German U-boats nearly strangled England, to the apocalyptic final years of destruction, disillusionment, and defeat.

Herbert A Werner was born in 1920. He joined the German Navy in 1939, and the U-boats in 1941, taking up his first command in 1943. He survived the war, was interned by the Americans, British and French, eventually to become an American citizen in 1957.

"Page for page, one of the most exciting accounts of submarine warfare...First-rate." -- Publishers Weekly