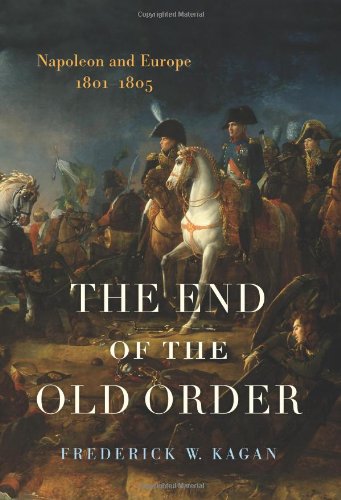 Perhaps no person in history has dominated his or her own era as much as Napoleon. Despite his small physical stature, the shadow of Napoleon is cast like a colossus, compelling all who would look at that epoch to chart their course by reference to him. For this reason, most historical accounts of the Napoleonic era-and there are many-tell the same Napoleon-dominated story over and over again, or focus narrowly on special aspects of it. Frederick Kagan, distinguished historian and military policy expert, has tapped hitherto unused archival materials from Austria, Prussia, France, and Russia, to present the history of these years from the balanced perspective of all of the major players of Europe. In The End of the Old Order readers encounter the rulers, ministers, citizens, and subjects of Europe in all of their political and military activity-from the desk of the prime minister to the pen of the ambassador, from the map of the general to the rifle of the soldier. With clear and lively prose, Kagan guides the reader deftly through the intriguing and complex web of international politics and war. The End of the Old Order is the first volume in a new and comprehensive four-volume study of Napoleon and Europe. Each volume in the series will surprise readers with a dramatically different tapestry of early nineteenth-century personalities and events and will revise fundamentally our ages-old understanding of the wars that created modern Europe.

Frederick W. Kagan is a Resident Scholar at the American Enterprise Institute. He is the author of The Military Reforms of Nicholas I, and a co-author with Donald Kagan of While America Sleeps.

"Brilliant...[Kagan's] ability to humanize Napoleon...renders a much more interesting and compelling figure than is usually depicted...Indispensable." -- Choice, May 2007

"Kagan employs a very readable narrative style...[And] the epic story is told, as it should be, from multiple viewpoints." -- Library Journal, 11/15/2006

"The strength of Kagan's book is the mix of diplomatic and political investigation...A very fine and full account of the battles." -- New Criterion, May 2007

6. THE END OF THE OLD ORDER: NAPOLE