Items related to Sealing Their Fate: The Twenty-two Days That Decided... 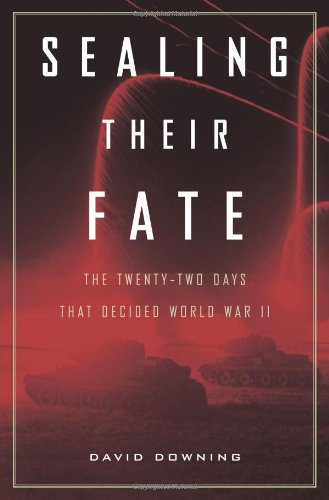 As the Japanese fleet prepared to sail from Japan to Pearl Harbor, the German army was launching its final desperate assault on Moscow, while the British were planning a decisive blow against Rommel in North Africa. The British conquered the desert, the Germans succumbed to Moscow's winter, and the Japanese awakened the sleeping giant of American might. In just three weeks, from November 17 to December 8, the course of World War II was decided and the fate of Germany and Japan was sealed.

With new insight and a fresh perspective, David Downing tells the story of these crucial days, shifting the riveting narrative from snowbound Russian villages to the stormy northern Pacific, from the North African desert to Europe's warring capitals, and from Tokyo to Washington.

David Downing is the author of numerous books, including military histories, alternate histories, biographies, and political thrillers. He divides his time between the United States and England.

Midway, Stalingrad, El Alamein: these great battles of 1942 are the conventional turning points of WWII. Downing (The Rise of Enemies) advances the decisive events by a year, making a provocative case that the German failure to take Moscow, the Japanese attack on Pearl Harbor and the British launching of Operation Crusader in North Africa established the conditions for Axis defeat. All three took place within 22 days, and Downing uses a narrative approach to establish the connections among them. Crusader, he says, demonstrated the importance of logistics even in high-tech war: the British Empire could sustain operations on a scale impossible for the Germans and Italians. The attack on Moscow was a final desperate lunge after victory in a campaign characterized by the massive overextension of German forces and resources. Pearl Harbor was an effort to escape a dilemma generated by brutally aggressive policies in Asia. The originality of Downing's argument is the strength of his indictment of œstupidity, incompetence, short-sightedness and evil in high places on all sides. But it took almost four years and millions of lives for overwhelming force to grind down feckless ambition. 16 pages of b&w photos, 3 maps. (June)
Copyright © Reed Business Information, a division of Reed Elsevier Inc. All rights reserved.