Items related to Hell from the Heavens: The Epic Story of the USS Laffey...

Wukovits, John Hell from the Heavens: The Epic Story of the USS Laffey and World War II's Greatest Kamikaze Attack

Hell from the Heavens: The Epic Story of the USS Laffey and World War II's Greatest Kamikaze Attack 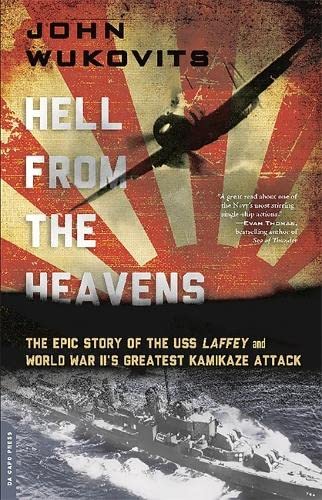 On April 16, 1945, the crewmen of the USS Laffey were battle hardened and prepared. They had engaged in combat off the Normandy coast in June 1944. They had been involved in three prior assaults of enemy positions in the Pacific-at Leyte and Lingayen in the Philippines and at Iwo Jima. They had seen kamikazes purposely crash into other destroyers and cruisers in their unit and had seen firsthand the bloody results of those crazed tactics. But nothing could have prepared the crew for this moment-an eighty-minute ordeal in which the single small ship was targeted by no fewer than twenty-two Japanese suicide aircraft.

By the time the unprecedented attack on the Laffey was finished, thirty-two sailors lay dead, more than seventy were wounded, and the ship was grievously damaged. Although she lay shrouded in smoke and fire for hours, the Laffey somehow survived, and the gutted American warship limped from Okinawa's shore for home, where the ship and crew would be feted as heroes.

Using scores of personal interviews with survivors, the memoirs of crew members, and the sailors' wartime correspondence, historian and author John Wukovits breathes life into the story of this nearly forgotten historic event. The US Navy described the kamikaze attack on the Laffey "as one of the great sea epics of the war." In Hell from the Heavens, the author makes the ordeal of the Laffey and her crew a story for the ages.

John Wukovits is a military expert specializing in the Pacific Theater of World War II. He is the author of many books, including For Crew and Country, One Square Mile of Hell, and Pacific Alamo. He has also written numerous articles for such publications as WWII History, Naval History, and World War II. He lives in Michigan.

Praise for Hell from the Heavens

"John Wukovits is a master storyteller of battle at sea. With a fine eye for revealing detail, he re-creates, with sure and dramatic strokes, the almost unbelievable story of a destroyer, its dauntless captain, and its brave men under assault by a score of kamikazes in the climactic days of the Pacific War. A great read about one of the Navy's most stirring single-ship actions." Evan Thomas, bestselling author of Sea of Thunder and John Paul Jones

"Inspiring true story of a legendary World War II warship that famously refused to die and her intrepid crew of tin can soldiers who fought their way across the seas from Normandy to Okinawa. John Wukovits's Hell from the Heavens is naval history at its compelling best." Bruce Henderson, coauthor of the New York Times bestseller And the Sea Will Tell

"John Wukovits is one of those rare authors with the ability to capture the stink, the heat, and the fear of battle. In Hell from the Heavens, he almost without mercy thrusts the reader into the terrifying experience of being on the receiving end of Japanese suicide attacks. If your palms aren't sweating while reading this book, you need to have your vital signs checked!" Flint Whitlock, editor of WWII Quarterly

"Well researched and finely written, Hell from the Heavens brings vividly to life the story of USS Laffey's life-or-death struggle against kamikazes determined to send her to the bottom. The story of 'The Ship That Wouldn't Die' is a nail-biter, and John Wukovits tells it with panache." Stephen Harding, author of the New York Times bestseller The Last Battle

Kirkus Reviews, 2/15/15
The incredible story of the destroyer with a heart that couldn't be broken'.... For WWII buffs, surely, but also for general readers looking to understand the damage inflicted and the terror inspired by the Japanese suicide squadrons.”

"This detailed account...gives a clear and interesting picture of what actually took place...The author offers a well-constructed and clearly written narrative...An absorbing, fast-paced recounting of a significant incident in WWII PTO history. Any naval enthusiast with an interest in destroyers in general or operations off Okinawa in particular would do well to consider this book...The lively writing style would also make it a good first reading experience for anyone who is showing an interest in naval history."

"A compelling tale of bravery and tenacity...Wukovits offers a very well written account of the USS Laffey, making extensive use of personal interviews that the author conducted with former members of the ship's crew. Indeed, his moment-by-moment account of the April 16 kamikaze attack almost places the reader at the scene...The book provides an enjoyable narrative that will appeal to those with a general interest in World War II, naval history, or the Pacific war in particular...Its strength is its storytelling, which Wukovits does very well. Thus, it offers a strong narrative for a popular history audience."
―H-Net


"[A] tale of great courage...This is an excellent tome that provides a lucid account of 'what a group of individuals can do when united by sound leadership and a deep sense of duty.'"
―Curled Up with a Good Book

1. HELL FROM THE HEAVENS: THE EPIC

2. HELL FROM THE HEAVENS: THE EPIC

3. HELL FROM THE HEAVENS: THE EPIC

4. HELL FROM THE HEAVENS: THE EPIC

5. Hell from the Heavens: The Epic Story of the USS Laffey and World War II's Greatest Kamikaze Attack