Items related to The Cross of Redemption: Uncollected Writings (Vintage... 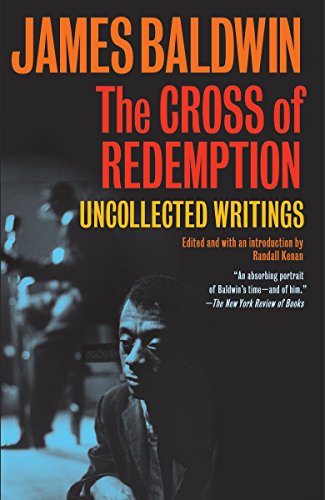 The Cross of Redemption is a revelation by an American literary master: a gathering of essays, articles, polemics, reviews, and interviews that have never before appeared in book form.

James Baldwin was one of the most brilliant and provocative literary figures of the past century, renowned for his fierce engagement with issues haunting our common history. In The Cross of Redemption we have Baldwin discoursing on, among other subjects, the possibility of an African-American president and what it might mean; the hypocrisy of American religious fundamentalism; the black church in America; the trials and tribulations of black nationalism; anti-Semitism; the blues and boxing; Russian literary masters; and the role of the writer in our society.

Prophetic and bracing, The Cross of Redemption is a welcome and important addition to the works of a cosmopolitan and canonical American writer who still has much to teach us about race, democracy, and personal and national identity. As Michael Ondaatje has remarked, “If van Gogh was our nineteenth-century artist-saint, Baldwin [was] our twentieth-century one.”

James Baldwin was born in 1924 and died in 1987. Among his more than twenty works of fiction and nonfiction are Giovanni’s Room, Go Tell It on the Mountain, Notes of a Native Son, and The Fire Next Time.

Randall Kenan is the author of, among other books, the novel A Visitation of Spirits and the short story collection Let the Dead Bury Their Dead. He teaches creative writing at the University of North Carolina at Chapel Hill.

Why I Stopped Hating Shakespeare

Every writer in the English language, I should imagine, has at some point hated Shakespeare, has turned away from that monstrous achieve­ment with a kind of sick envy. In my most anti-English days I condemned him as a chauvinist (“this England” indeed!) and because I felt it so bitterly anomalous that a black man should be forced to deal with the English lan­guage at all—should be forced to assault the English language in order to be able to speak—I condemned him as one of the authors and architects of my oppression.

Again, in the way that some Jews bitterly and mistakenly resent Shylock, I was dubious about Othello (what did he see in Desdemona?) and bitter about Caliban. His great vast gallery of people, whose reality was as con­tradictory as it was unanswerable, unspeakably oppressed me. I was resenting, of course, the assault on my simplicity; and, in another way, I was a victim of that loveless education which causes so many schoolboys to detest Shakespeare. But I feared him, too, feared him because, in his hands, the English language became the mightiest of instruments. No one would ever write that way again. No one would ever be able to match, much less surpass, him.

Well, I was young and missed the point entirely, was unable to go behind the words and, as it were, the diction, to what the poet was saying. I still remember my shock when I finally heard these lines from the murder scene in Julius Caesar. The assassins are washing their hands in Caesar’s blood. Cassius says:

Stoop then, and wash.—How many ages hence
Shall this our lofty scene be acted over,
In states unborn and accents yet unknown!

What I suddenly heard, for the first time, was manifold. It was the voice of lonely, dedicated, deluded Cassius, whose life had never been real for me before—I suddenly seemed to know what this moment meant to him. But beneath and beyond that voice I also heard a note yet more rigorous and impersonal—and contemporary: that “lofty scene,” in all its blood and nec­essary folly, its blind and necessary pain, was thrown into a perspective which has never left my mind. Just so, indeed, is the heedless State over­thrown by men, who, in order to overthrow it, have had to achieve a des­perate single- mindedness. And this single- mindedness, which we think of (why?) as ennobling, also operates, and much more surely, to distort and diminish a man—to distort and diminish us all, even, or perhaps especially, those whose needs and whose energy made the overthrow of the State inevitable, necessary, and just.

And the terrible thing about this play, for me—it is not necessarily my favorite play, whatever that means, but it is the play which I first, so to speak, discovered—is the tension it relentlessly sustains between individual ambition, self- conscious, deluded, idealistic, or corrupt, and the blind, mindless passion which drives the individual no less than it drives the mob. “I am Cinna the poet, I am Cinna the poet...I am not Cinna the conspir­ator”—that cry rings in my ears. And the mob’s response: “Tear him for his bad verses!” And yet—though one howled with Cinna and felt his terrible rise, at the hands of his countrymen, to death, it was impossible to hate the mob. Or, worse than impossible, useless; for here we were, at once howl­ing and being torn to pieces, the only receptacles of evil and the only recep­tacles of nobility to be found in all the universe. But the play does not even suggest that we have the perception to know evil from good or that such a distinction can ever be clear: “The evil that men do lives after them; The good is oft interred with their bones . . .”

Once one has begun to suspect this much about the world—once one has begun to suspect, that is, that one is not, and never will be, innocent, for the reason that no one is—some of the self- protective veils between oneself and reality begin to fall away. It is probably of some significance, though we cannot pursue it here, that my first real apprehension of Shake­speare came when I was living in France, and thinking and speaking in French. The necessity of mastering a foreign language forced me into a new relationship to my own. (It was also in France, therefore, that I began to read the Bible again.)

In support of this possibility, I had two mighty witnesses: my black ancestors, who evolved the sorrow songs, the blues, and jazz, and created an entirely new idiom in an overwhelmingly hostile place; and Shake­speare, who was the last bawdy writer in the English language. What I began to see—especially since, as I say, I was living and speaking in French—is that it is experience which shapes a language; and it is language which controls an experience. The structure of the French language told me something of the French experience, and also something of the French expectations—which were certainly not the American expectations, since the French daily and hourly said things which the Americans could not say at all. (Not even in French.) Similarly, the language with which I had grown up had certainly not been the King’s English. An immense experience had forged this language; it had been (and remains) one of the tools of a peo­ple’s survival, and it revealed expectations which no white American could easily entertain. The authority of this language was in its candor, its irony, its density, and its beat: this was the authority of the language which pro­duced me, and it was also the authority of Shakespeare.

Again, I was listening very hard to jazz and hoping, one day, to translate it into language, and Shakespeare’s bawdiness became very important to me, since bawdiness was one of the elements of jazz and revealed a tremendous, loving, and realistic respect for the body, and that ineffable force which the body contains, which Americans have mostly lost, which I had experienced only among Negroes, and of which I had then been taught to be ashamed.

My relationship, then, to the language of Shakespeare revealed itself as nothing less than my relationship to myself and my past. Under this light, this revelation, both myself and my past began slowly to open, perhaps the way a flower opens at morning, but more probably the way an atrophied muscle begins to function, or frozen fingers to thaw.

The greatest poet in the English language found his poetry where poetry is found: in the lives of the people. He could have done this only through love—by knowing, which is not the same thing as understanding, that whatever was happening to anyone was happening to him. It is said that his time was easier than ours, but I doubt it—no time can be easy if one is living through it. I think it is simply that he walked his streets and saw them, and tried not to lie about what he saw: his public streets and his private streets, which are always so mysteriously and inexorably con­nected; but he trusted that connection. And, though I, and many of us, have bitterly bewailed (and will again) the lot of an American writer—to be part of a people who have ears to hear and hear not, who have eyes to see and see not—I am sure that Shakespeare did the same. Only, he saw, as I think we must, that the people who produce the poet are not responsible to him: he is responsible to them.

That is why he is called a poet. And his responsibility, which is also his joy and his strength and his life, is to defeat all labels and complicate all bat­tles by insisting on the human riddle, to bear witness, as long as breath is in him, to that mighty, unnameable, transfiguring force which lives in the soul of man, and to aspire to do his work so well that when the breath has left him, the people—all people!—who search in the rubble for a sign or a wit­ness will be able to find him there.

5. The Cross of Redemption: Uncollected Writings