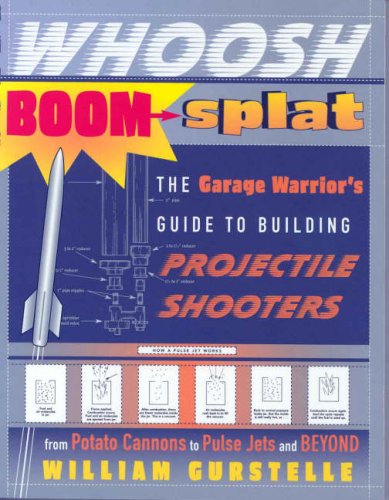 These are the homemade machines that you’ve dreamed of building, from the high-voltage Night Lighter 36 spud gun to the Jam Jar Jet, the Marshmallow Shooter, and the Yagua Blowgun. Including detailed diagrams and supply lists, Gurstelle’s simple, step-by-step instructions help workshop warriors at any skill level achieve impressively powerful results. With Whoosh Boom Splat, you can build:

In addition to learning how to make these cool gadgets, you’ll find sections packed with information on what makes each machine unique. Gurstelle describes the machine’s historical origins as only he can: with verve, fun, and the sort of quirky details his legions of fans love. Whoosh Boom Splat is a must-have for every extreme tinkerer.

William Gurstelle is the author of Adventures from the Technology Underground, Backyard Ballistics, Building Bots, and The Art of the Catapult. The number of hours he’s spent crafting fighting robots and catapults instead of working at, say, his normal job (as an engineer) is, in Bill’s own words “scary to contemplate, but it serves a purpose.” When not building devices that make stuff go whoosh, boom, and splat, Bill is a contributing editor at Make magazine and writes frequently for Wired, The Rake, and several other national magazines. He lives in Minneapolis.