Items related to Stop Forgetting to Remember: The Autobiography of Walter...

Stop Forgetting to Remember: The Autobiography of Walter Kurtz 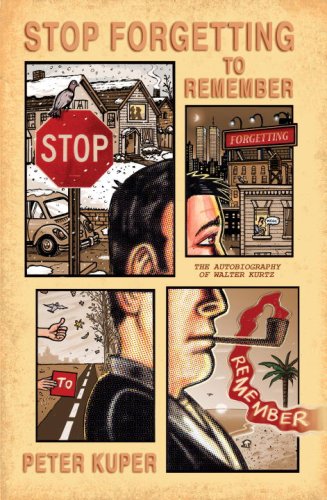 WHO SHOT WALTER KURTZ?
Nobody. Walter Kurtz doesn’t exist. He’s the alter ego of me, Peter Kuper. But, if he were real, perhaps his obituary would read something like this:

Walter Kurtz, illustrator and self-exposing cartoonist, dies of embarrassment at 48.

Walter Alan Kurtz, born September 22,1958, in Cleveland, Ohio, to Harvey and Olive Kurtz (an Ellis Island rewrite from Kurtzberg), was pronounced dead at Mt. Sinai Hospital on Monday. He was rushed there following his collapse at the publication party for his coming-of-middle-age novel, Stop Forgetting to Remember. Kurtz was among the wave of cartoonists who helped to redefine the medium of comics and ushered in an explosion of interest in the graphic novel. He was noted for drawing the world-famous “Ebony vs. Ivory” for Nuts magazine every month and for cofounding the political zine Bomb Shelter with his lifelong friend Saul Blockman.

As an educator and lecturer, Kurtz has encouraged legions of aspiring cartoonists to avoid entering the field. He was a successful illustrator whose work appeared in numerous newspapers and magazines, but his heart belonged to cartooning until the end.

Survived by his wife, Sandra B. Russ, and their only child.

Of course, a laundry list of Walter Kurtz’s accomplishments barely scratches the surface of the cartoon character. Are professional details what define an alter ego?

“Brilliantly insightful,” “Painfully hilarious,” and “Pow! Blam! Bang! Comics aren’t just for kids anymore!” are words I’ve heard to describe Walter Kurtz’s work.Yet I can’t keep from wondering whether this excessive praise comes from people who are ignorant of the medium’s capacity to address serious subject matter like parenting and masturbation. But jealousy aside, the truth is, I could never bring myself to delve as deep and reveal as many embarrassing details as he has bravely (?) done in this book. The idea of exposing one’s shameful history for all to see is beyond me, and frankly I’m still baffled by what motivates him. One can only imagine the discomfort this must have created for friends and family, most especially for his long-suffering wife, Sandra. My spouse would have killed me!

But let me not end these flaps on a down note. I personally believe his self-immolation illuminates our understanding of the human condition and helps comics take another step closer to receiving the recognition they deserve as a serious art form. The best obituary that will ever be written about Walter Kurtz is the graphic novel you hold in your hands.

He’s dug his own grave.

Kuper's alter ego, Walter Kurtz, reminisces about his path from awkward adolescence to current success as a commercial illustrator and father-to-be. His account incorporates first-person stories, many of which reappear here from Kuper's collection Stripped (1995), dealing with his efforts to lose his virginity, recreational drug use, and unhealthy relationships. In the present-day setting framing these recollections, Kurtz-Kuper struggles to face adult responsibilities, sacrificing any semblance of the life he once led to the demands of parenthood and incidentally flowing nicely into the current wave of "hip dad" confessionals (e.g., Joe Chiappetta's graphic novel Silly Daddy, 2004). Kuper's newest artwork is of a piece with the decades-old stuff it surrounds, for although he has simplified his distinctive, pseudowoodcut style, his art retains the graphic appeal that has landed his work on the covers of Time and Newsweek. The mainstream readers new to graphic novels should relate to Kuper's heartfelt effort to balance family, work, and friendships as readily as loyal fans identified with the pot-smoking, globe-trotting Kuper of his erstwhile alternative comics. Gordon Flagg
Copyright © American Library Association. All rights reserved

Unexpectedly, this quasi-autobiographical meditation on fantasy and reality succeeds in being as hilarious as it is heartbreaking. Like Kuper, his alter ego Kurtz is a cartoonist who divides his time between mainstream and independent work while also struggling to be a good husband, father and friend in an unsupportive world. He talks directly to the reader as he describes his goals when he was younger (getting laid, getting high, etc.), how he botched his chances or suffered when he did get what he wanted and how he accepted those successes and failures and then moved on. The story is typical, but Kuper's art shifts from realistic to surreal as the mood changes, and this is where the book really takes off. He plays with a comics reader's head, as when Kurtz's new-daddy desperation convinces him that he's not just a cartoonist but a cartoon so that he slips into a Crumb parody panel, Keep on Parentin'. Kurtz/Kuper does go on developing as a human being, through 9/11 and the despair of being a serious observer in Bush's America, into a surprisingly but satisfyingly hopeful conclusion. This is a very smart, mature work by an artist at the top of his form. (July)
Copyright © Reed Business Information, a division of Reed Elsevier Inc. All rights reserved.

1. Stop Forgetting to Remember: The Autobiography of Walter Kurtz

2. Stop Forgetting to Remember: The Autobiography of Walter Kurtz

3. Stop Forgetting to Remember: The Autobiography of Walter Kurtz