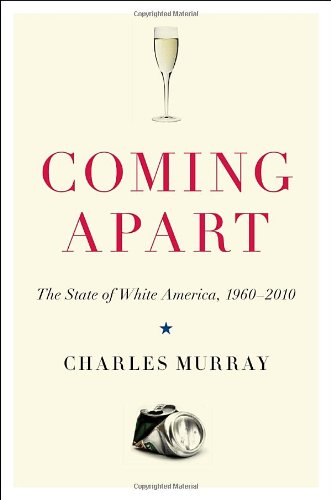 Coming Apart - an acclaimed bestseller that explains why white America has become fractured and divided in education and class.

In Coming Apart, Charles Murray explores the formation of American classes that are different in kind from anything we have ever known, focusing on whites as a way of driving home the fact that the trends he describes do not break along lines of race or ethnicity.

Drawing on five decades of statistics and research, Coming Apart demonstrates that a new upper class and a new lower class have diverged so far in core behaviors and values that they barely recognize their underlying American kinship—divergence that has nothing to do with income inequality and that has grown during good economic times and bad.

The top and bottom of white America increasingly live in different cultures, Murray argues, with the powerful upper class living in enclaves surrounded by their own kind, ignorant about life in mainstream America, and the lower class suffering from erosions of family and community life that strike at the heart of the pursuit of happiness. That divergence puts the success of the American project at risk.

The evidence in Coming Apart is about white America. Its message is about all of America.

Niall Ferguson is professor of history at Harvard, a fellow of the Hoover Institution and the author of numerous books, most recently Civilization: The West and the Rest and The Ascent of Money: A Financial History of the World.

Since the advent of "Occupy Wall Street," there has been a tendency to assume that only the Left worries about inequality in America. Charles Murray's Coming Apart shows that conservatives, too, need to be concerned.

This is an immensely important and utterly gripping book. It deserves to be as much talked about as Murray's most controversial work (co-authored with Richard J. Herrnstein), The Bell Curve. Quite unjustly, that book was anathematized as "racist" because it pointed out that, on average, African-Americans had lower IQ scores than white Americans.

No doubt the same politically correct critics will complain about this book, because it is almost entirely devoted to the problem of social polarization within "white America." They will have to ignore one of Coming Apart's most surprising findings: that race is not a significant determinant of social polarization in today's America. It is class that really matters.

Murray meticulously chronicles and measures the emergence of two wholly distinct classes: a new upper class, first identified in The Bell Curve as "the cognitive elite," and a new "lower class," which he is too polite to give a name. And he vividly localizes his argument by imagining two emblematic communities: Belmont, where everyone has at least one college degree, and Fishtown, where no one has any. (Read: Tonyville and Trashtown.)

The key point is that the four great social trends of the past half-century--the decline of marriage, of the work ethic, of respect for the law and of religious observance--have affected Fishtown much more than Belmont. As a consequence, the traditional bonds of civil society have atrophied in Fishtown. And that, Murray concludes, is why people there are so very unhappy--and dysfunctional.

What can be done to reunite these two classes? Murray is dismissive of the standard liberal prescription of higher taxes on the rich and higher spending on the poor. As he points out, there could hardly be a worse moment to try to import the European welfare state, just as that system suffers fiscal collapse in its continent of origin.

What the country needs is not an even larger federal government but a kind of civic Great Awakening--a return to the republic's original foundations of family, vocation, community, and faith.

Coming Apart is a model of rigorous sociological inquiry, yet it is also highly readable. After the chronic incoherence of Occupy Wall Street, it comes as a blessed relief. Every American should read it. Too bad only the cognitive elite will.

CHARLES MURRAY is the W. H. Brady Scholar at the American Enterprise Institute. He first came to national attention in 1984 with Losing Ground. His subsequent books include In Pursuit, The Bell Curve (with Richard J. Herrnstein), What It Means to Be a Libertarian, Human Accomplishment, In Our Hands, and Real Education. He received a bachelor’s degree in history from Harvard and a Ph.D. in political science from the Massachusetts Institute of Technology. He lives with his wife in Burkittsville, Maryland.