Items related to In Fed We Trust: Ben Bernanke's War on the Great...

Wessel, David In Fed We Trust: Ben Bernanke's War on the Great Panic

In Fed We Trust: Ben Bernanke's War on the Great Panic 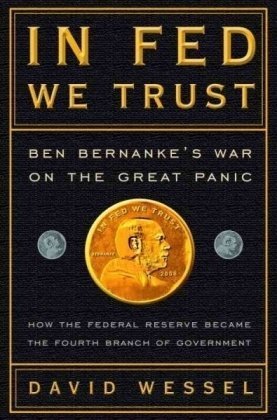 That was Federal Reserve Chairman Ben Bernanke’s vow as the worst financial panic in more than fifty years gripped the world and he struggled to avoid the once unthinkable: a repeat of the Great Depression. Brilliant but temperamentally cautious, Bernanke researched and wrote about the causes of the Depression during his career as an academic. Then when thrust into a role as one of the most important people in the world, he was compelled to boldness by circumstances he never anticipated.

The president of the United States can respond instantly to a missile attack with America’s military might, but he cannot respond to a financial crisis with real money unless Congress acts. The Fed chairman can. Bernanke did. Under his leadership the Fed spearheaded the biggest government intervention in more than half a century and effectively became the fourth branch of government, with no direct accountability to the nation’s voters.

Believing that the economic catastrophe of the 1930s was largely the fault of a sluggish and wrongheaded Federal Reserve, Bernanke was determined not to repeat that epic mistake. In this penetrating look inside the most powerful economic institution in the world, David Wessel illuminates its opaque and undemocratic inner workings, while revealing how the Bernanke Fed led the desperate effort to prevent the world’s financial engine from grinding to a halt.

In piecing together the fullest, most authoritative, and alarming picture yet of this decisive moment in our nation’s history, In Fed We Trust answers the most critical questions. Among them:

· What did Bernanke and his team at the Fed know–and what took them by surprise? Which of their actions stretched–or even ripped through–the Fed’s legal authority? Which chilling numbers and indicators made them feel they had no choice?

· What were they thinking at pivotal moments during the race to sell Bear Stearns, the unsuccessful quest to save Lehman Brothers, and the virtual nationalization of AIG, Fannie Mae, and Freddie Mac? What were they saying to one another when, as Bernanke put it to Wessel: “We came very close to Depression 2.0”?

· How did the crisis prompt a reappraisal of the once-impregnable reputation of Alan Greenspan?

In Fed We Trust is a breathtaking and singularly perceptive look at a historic episode in American and global economic history.

DAVID WESSEL is the economics editor of The Wall Street Journal and writes the Capital column, a weekly look at the forces shaping living standards around the world. David has shared two Pulitzer Prizes, one for Boston Globe stories in 1983 on the persistence of racism in Boston and the other for stories in The Wall Street Journal in 2002 on corporate wrongdoing. He appears frequently on National Public Radio and is a regular on PBS’s Washington Week.

At the beginning of October 2008, after some of the toughest weeks of the Great Panic, the lines in Ben Bernanke’s face and the circles under his eyes offered evidence of more than a year of seven- day weeks and conference calls that stretched past midnight. Sometimes all that seemed to keep Bernanke going was the constantly restocked bowl of trail mix that sat on his secretary’s desk and the cans of diet Dr Pepper from the refrigerator in his office. But the balding, bearded chairman of the Federal Reserve managed a smile as he confided that he had a title for the book he would write someday about his watch as helmsman of the world economy: Before Asia Opens . . .

The phrase was a reference to the series of precedent shattering decisions that Bernanke and others at the Fed and Treasury had been forced to make with insufficient sleep and inadequate preparation on Sundays so they could be announced before financial markets opened Monday morning in Asia, half a day ahead of Washington and New York.

Before Asia Opens . . . was not a laugh line. The subprime mortgage mess was made in America, and that meant the U.S. government was forced to lead the cleanup. Ben Bernanke had more immediate power to do that than any other individual. The president of the United States can respond instantly to a missile attack with real bullets; he cannot respond instantly to financial panic with real money without the prior approval of Congress. But Bernanke could and did.

Yet the United States had become so dependent on the flow of money from abroad and the business of American financial institutions was so intertwined with those overseas that Bernanke didn’t have the luxury of waiting until the sun rose over Washington to make decisions and pronouncements. Hence the subject line Goldman Sachs economists put on one of their weekly e- mails: “Sunday is the new Monday.”

There was the Sunday in March 2008 when the Federal Reserve shattered seventy years of tradition and lent $30 billion to induce JPMorgan Chase to buy Bear Stearns, a flailing investment bank the Fed neither regulated nor officially protected.

And the Sunday in August 2008 when Bernanke and Treasury Secretary Henry Paulson, the nation’s self- appointed investment banker in chief, decided to seize Fannie Mae and Freddie Mac, the government- sponsored, shareholder- owned mortgage giants that had borrowed heavily from abroad.

And the Sunday in late September 2008 when Bernanke and his Wall Street field marshal, Timothy Geithner, then president of the Federal Reserve Bank of New York, pressured the Federal Deposit Insurance Corporation to invoke an emergency law to subsidize Citigroup’s attempt to strengthen itself by acquiring Wachovia.

Yet no Sunday of the Great Panic would prove as consequential and controversial as September 14, 2008, the day Bernanke, Geithner, and Paulson allowed Lehman Brothers to fail after a desperate search for someone to buy it.

The government- sanctioned bankruptcy of a Wall Street firm founded before the Civil War marked a new phase in the Great Panic, a moment when financial markets went from bad to awful. The Wall Street Journal dubbed it the “Weekend That Wall Street Died.” Lehman’s bankruptcy was the largest in U.S. history. The financial market reaction was ugly. At the end of trading on Monday, the Dow had plummeted over 500 points, its biggest one- day drop since September 17, 2001, when trading resumed following the 9/11 attacks. While financial giants led the way down — Goldman Sachs stock lost 19 percent, Citigroup 15 percent — every major sector on the S&P 500 index posted a loss. Other economic indicators were also negative: In anticipation of a global slowdown, oil prices plunged, while spooked investors sent the price of supersafe Treasury bills soaring. In a sign of what was coming, dozens of traders crowded around the specialists who trade American International Group, America’s largest insurance company, on the New York Stock Exchange floor as Monday’s trading began. AIG shares, which had closed on Friday at $12.14, opened Monday at $7.12 and ended the day at $4.76.

As horrible as the first day after Lehman was, the bigger fear was that nobody knew where the collapse might end. Bernanke, Geithner, and Paulson confronted the biggest threat to American capitalism since the 1930s, and their responses were commensurately big.

Within one week, they:

· married venerable brokerage house Merrill Lynch to Bank of America
· all but nationalized AIG, pumping in $85 billion of Fed money to keep it alive
· risked taxpayer money to halt a run on money market mutual funds no one ever considered guaranteed by the government
· administered last rites for Wall Street’s investment- banking business model by converting Goldman Sachs and Morgan Stanley into Fed- protected bank- holding companies
· pleaded with Congress to give the Treasury $700 billion to prevent catastrophe, a request that ultimately led to a Republican administration taking a government ownership stake in the nation’s biggest banks

The Fed was the first responder. It acted as quickly and forcefully as its leaders could manage in order to prevent the country — and the global economy— from plunging into the abyss. Bernanke bluntly said as much later: “We came very, very close to a global financial meltdown, a situation in which many of the largest institutions in the world would have failed, where the financial system would have shut down, and . . . in which the economy would have fallen into a much deeper and much longer and more protracted recession.”

In ways that the public and politicians had never before appreciated, that weekend, and the months that followed, would reveal that the Federal Reserve had become a fourth branch of government, nearly equal in power to the executive, legislative, and judicial branches, though still subject to their constitutional authority if they chose to assert it.

Ben Bernanke and a small cadre of advisers would vow to do whatever it takes to avoid a possibility that, until 2008, was unthinkable: a repeat of the Great Depression.

1. In Fed We Trust: Ben Bernanke's War on the Great Panic

2. In Fed We Trust: Ben Bernanke's War on the Great Panic

3. In Fed We Trust: Ben Bernanke's War on the Great Panic

4. In Fed We Trust: Ben Bernanke's War on the Great Panic

5. In Fed We Trust: Ben Bernanke's War on the Great Panic

6. In fed we trust. Ben Bernanke's war on the great panic

7. In Fed We Trust: Ben Bernanke's War on the Great Panic

8. In Fed We Trust: Ben Bernanke's War on the Great Panic

9. In Fed We Trust: Ben Bernanke's War on the Great Panic

10. In Fed We Trust: Ben Bernanke's War on the Great Panic Wessel, David