Items related to The 4-Hour Workweek: Escape 9-5, Live Anywhere, and... 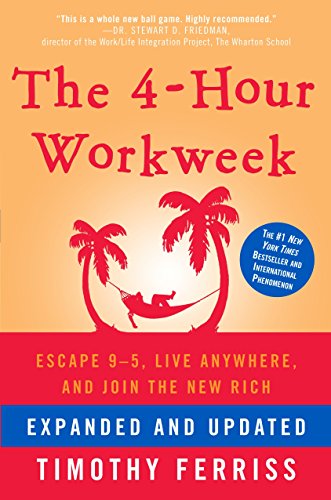 The New York Times bestselling author of The 4-Hour Body shows readers how to live more and work less, now with more than 100 pages of new, cutting-edge content.

Forget the old concept of retirement and the rest of the deferred-life plan–there is no need to wait and every reason not to, especially in unpredictable economic times. Whether your dream is escaping the rat race, experiencing high-end world travel, or earning a monthly five-figure income with zero management, The 4-Hour Workweek is the blueprint.

This step-by-step guide to luxury lifestyle design teaches:
· How Tim went from $40,000 per year and 80 hours per week to $40,000 per month and 4 hours per week
· How to outsource your life to overseas virtual assistants for $5 per hour and do whatever you want
· How blue-chip escape artists travel the world without quitting their jobs
· How to eliminate 50% of your work in 48 hours using the principles of a forgotten Italian economist
· How to trade a long-haul career for short work bursts and frequent “mini-retirements”

The new expanded edition of Tim Ferriss’ The 4-Hour Workweek includes:
· More than 50 practical tips and case studies from readers (including families) who have doubled income, overcome common sticking points, and reinvented themselves using the original book as a starting point
· Real-world templates you can copy for eliminating e-mail, negotiating with bosses and clients, or getting a private chef for less than $8 a meal
· How Lifestyle Design principles can be suited to unpredictable economic times
· The latest tools and tricks, as well as high-tech shortcuts, for living like a diplomat or millionaire without being either

TIMOTHY FERRISS is a serial entrepreneur, #1 New York Times bestselling author, and angel investor/advisor (Facebook, Twitter, Evernote, Uber, and 20+ more).  Best known for his rapid-learning techniques, Tim's books -- The 4-Hour Workweek, The 4-Hour Body, and The 4-Hour Chef -- have been published in 30+ languages. The 4-Hour Workweek has spent seven years on The New York Times bestseller list. Tim has been featured by more than 100 media outlets including The New York Times, The Economist, TIME, Forbes, Fortune, Outside, NBC, CBS, ABC, Fox and CNN. He has guest lectured in entrepreneurship at Princeton University since 2003. His popular blog www.fourhourblog.com has 1M+ monthly readers, and his Twitter account @tferriss was selected by Mashable as one of only five “Must-Follow” accounts for entrepreneurs. Tim’s primetime TV show, The Tim Ferriss Experiment (www.upwave.com/tfx), teaches rapid-learning techniques for helping viewers to produce seemingly superhuman results in minimum time.

These individuals have riches just as we say that we “have a fever,” when really the fever has us.

I also have in mind that seemingly wealthy, but most terribly impoverished class of all, who have accumulated dross, but know not how to use it, or get rid of it, and thus have forged their own golden or silver fetters.

His friends, drunk to the point of speaking in tongues, were asleep. It was just the two of us now in first-class. He extended his hand to introduce himself, and an enormous—Looney Tunes enormous—diamond ring appeared from the ether as his fingers crossed under my reading light.

Mark was a legitimate magnate. He had, at different times, run practically all the gas stations, convenience stores, and gambling in South Carolina. He confessed with a half smile that, in an average trip to Sin City, he and his fellow weekend warriors might lose an average of $500,000 to $1,000,000—each. Nice.

He sat up in his seat as the conversation drifted to my travels, but I was more interested in his astounding record of printing money.

“So, of all your businesses, which did you like the most?”

The answer took less than a second of thought.

He explained that he had spent more than 30 years with people he didn’t like to buy things he didn’t need. Life had become a succession of trophy wives—he was on lucky number three—expensive cars, and other empty bragging rights. Mark was one of the living dead.

This is exactly where we don’t want to end up.

Apples and Oranges: A Comparison

So, what makes the difference? What separates the New Rich, characterized by options, from the Deferrers (D), those who save it all for the end only to find that life has passed them by?

It begins at the beginning. The New Rich can be separated from the crowd based on their goals, which reflect very distinct priorities and life philosophies.

Note how subtle differences in wording completely change the necessary actions for fulfilling what at a glance appear to be similar goals. These are not limited to business owners. Even the first, as I will show later, applies to employees.

NR:To have others work for you.

D:To work when you want to.

NR:To prevent work for work’s sake, and to do the minimum necessary for maximum effect (“minimum effective load”).

NR:To distribute recovery periods and adventures (mini-retirements) throughout life on a regular basis and recognize that inactivity is not the goal. Doing that which excites you is.

D:To buy all the things you want to have.

D:To be the boss instead of the employee; to be in charge.

NR:To be neither the boss nor the employee, but the owner. To own the trains and have someone else ensure they run on time.

D:To make a ton of money.

NR:To make a ton of money with specific reasons and defined dreams to chase, timelines and steps included. What are you working for?

NR:To have more quality and less clutter. To have huge financial reserves but recognize that most material wants are justifications for spending time on the things that don’t really matter, including buying things and preparing to buy things. You spent two weeks negotiating your new Infiniti with the dealership and got $10,000 off? That’s great. Does your life have a purpose? Are you contributing anything useful to this world, or just shuffling papers, banging on a keyboard, and coming home to a drunken existence on the weekends?

D:To reach the big pay-off, whether IPO, acquisition, retirement, or other pot of gold.

D:To have freedom from doing that which you dislike.

NR:To have freedom from doing that which you dislike, but also the freedom and resolve to pursue your dreams without reverting to work for work’s sake (W4W). After years of repetitive work, you will often need to dig hard to find your passions, redefine your dreams, and revive hobbies that you let atrophy to near extinction. The goal is not to simply eliminate the bad, which does nothing more than leave you with a vacuum, but to pursue and experience the best in the world.

Getting Off the Wrong Train

The first principle is that you must not fool yourself, and you are the easiest person to fool.

Enough is enough. Lemmings no more. The blind quest for cash is a fool’s errand.

I’ve chartered private planes over the Andes, enjoyed many of the best wines in the world in between world-class ski runs, and lived like a king, lounging by the infinity pool of a private villa. Here’s the little secret I rarely tell: It all cost less than rent in the United States. If you can free your time and location, your money is automatically worth 3–10 times as much.

This has nothing to do with currency rates. Being financially rich and having the ability to live like a millionaire are fundamentally two very different things.

Money is multiplied in practical value depending on the number of W’s you control in your life: what you do, when you do it, where you do it, and with whom you do it. I call this the “freedom multiplier.”

Options—the ability to choose—is real power. This book is all about how to see and create those options with the least ef- fort and cost. It just so happens, paradoxically, that you can make more money—a lot more money—by doing half of what you are doing now.

qThe employee who rearranges his schedule and negotiates a remote work agreement to achieve 90% of the results in one-tenth of the time, which frees him to practice cross-country skiing and take road trips with his family two weeks per month.

qThe business owner who eliminates the least profitable customers and projects, outsources all operations entirely, and travels the world collecting rare documents, all while working remotely on a website to showcase her own illustration work.

qThe student who elects to risk it all—which is nothing—to establish an online video rental service that delivers $5,000 per month in income from a small niche of HDTV aficionados, a two-hour-per-week side project that allows him to work full-time as an animal rights lobbyist.

The options are limitless, but each path begins with the same first step: replacing assumptions.

To join the movement, you will need to learn a new lexicon and recalibrate direction using a compass for an unusual world. From inverting responsibility to jettisoning the entire concept of “success,” we need to change the rules.

New Players for a New Game: Global and Unrestricted

Civilization had too many rules for me, so I did my best to rewrite them.—Bill Cosby

As he rotated 360 degrees through the air, the deafening noise turned to silence. Dale Begg-Smith executed the backflip perfectly—skis crossed in an X over his head—and landed in the record books as he slid across the finish.

It was February 16, 2006, and he was now a mogul-skiing gold medalist at the Turin Winter Olympics. Unlike other full-time athletes, he will never have to return to a dead-end job after his moment of glory, nor will he look back at this day as the climax of his only passion. After all, he was only 21 years old and drove a black Lamborghini.

Born a Canadian and something of a late bloomer, Dale found his calling, an Internet-based IT company, at the age of 13. Fortunately, he had a more-experienced mentor and partner to guide him: his 15-year-old brother, Jason. Created to fund their dreams of standing atop the Olympic podium, it would, only two years later, become the third-largest company of its kind in the world.

While Dale’s teammates were hitting the slopes for extra sessions, he was often buying sake for clients in Tokyo. In a world of “work harder, not smarter,” it came to pass that his coaches felt he was spending too much time on his business and not enough time in training, despite his results.

In 2002, they moved to the ski capital of the world, Australia, where the team was smaller, more flexible, and coached by a legend. Three short years later, he received citizenship, went head-to-head against former teammates, and became the third “Aussie” in history to win winter gold.

In the land of wallabies and big surf, Dale has since gone postal. Literally. Right next to the Elvis Presley commemorative edition, you can bu...