Items related to Parrot and Olivier in America

Parrot and Olivier in America 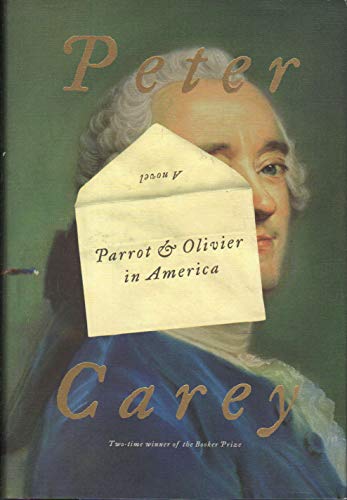 Parrot and Olivier in America has been shortlisted for the 2010 Man Booker Prize.

Olivier—an improvisation on the life of Alexis de Tocqueville—is the traumatized child of aristocratic survivors of the French Revolution. Parrot is the motherless son of an itinerant English printer. They are born on different sides of history, but their lives will be connected by an enigmatic one-armed marquis.

When Olivier sets sail for the nascent United States—ostensibly to make a study of the penal system, but more precisely to save his neck from one more revolution—Parrot will be there, too: as spy for the marquis, and as protector, foe, and foil for Olivier.

As the narrative shifts between the perspectives of Parrot and Olivier, between their picaresque adventures apart and together—in love and politics, prisons and finance, homelands and brave new lands—a most unlikely friendship begins to take hold. And with their story, Peter Carey explores the experiment of American democracy with dazzling inventiveness and with all the richness and surprise of characterization, imagery, and language that we have come to expect from this superlative writer.

Amazon Best Books of the Month, April 2010: In this vivid and visceral work of historical fiction, two-time Booker Prize winner Peter Carey imagines the experiences of Alexis de Tocqueville, the great French political philosopher and author of Democracy in America. Carey brings de Tocqueville to life through the fictionalized character of Olivier de Garmont, a coddled and conceited French aristocrat. Olivier can only begin to grasp how the other half lives when forced to travel to the New World with John "Parrot" Larrit, a jaded survivor of lifelong hardship who can’t stand his young master who he is expected to spy on for the overprotective Maman Garmont back in Paris. Parrot and Olivier are a mid-nineteenth-century Oscar and Felix who represent the highest and lowest social registers of the Old World, yet find themselves unexpectedly pushed together in the New World. This odd couple’s stark differences in class and background, outlook and attitude—which are explored in alternating chapters narrated by each—are an ingenious conceit for presenting to contemporary readers the unique social experiment that was democracy in the early years of America. --Lauren Nemroff

The Democracy of Story-Telling: A Review of Parrot and Olivier in America by Colum McCann

Colum McCann is the author of Zoli, Dancer and, most recently, Let the Great World Spin, which won the National Book Award for Fiction and was the Amazon editors' pick as the Best Book of 2009. Read his review of Parrot and Olivier in America:

Faulkner famously wrote that the past is not dead, it's not even past. Every now and then a voice comes along to make the proper claim that nobody should forget and, even more radically, that nobody should be forgotten. These voices remind us that life is not yet written down: there is more to the story than meets the original word. Peter Carey has made an exquisite art of this sort of exploration into history and language: he smashes the atom of story-telling and comes up with quirks and quarks and quarries.

Carey is a rogue in the very best sense of the word: we are led by delight into a story that is bound to be profound, complex, tender, demanding, reckless, rigorous, charming, and, indeed, true. The value of good literature is that there's always another story to unfold. And in the unfolding, we are led by mystery towards discovery. Strap on the Carey boots, you’ll encounter new lands.

Carey's newest novel, Parrot and Olivier in America, is the story of two men who begin their lives on different ends of the human spectrum. Olivier is an aristocrat, born in France just after the Revolution, while Parrot is the son of an itinerant English printer. Part of Carey's provocative genius is that, even in the title, Parrot is named before Olivier: it’s the late 18th century and both men have swallowed the handcuffs of history. The servant and master. The dreamer and the dreamt. The men travel to America together, land in New York, embark on journeys that have both private and mythic overtones in the "you-knighted states." Ramshackle prisons. Convict ships. Broadway brawls. Land deals. Penal colonies. The small revolutions of human desire and failure.

The men develop an understanding and a friendship and a complexity that is a hallmark of a Carey novel: it is a wonder, as he points out, how many lives can be held within one single skin. The story is an examination of how landscape forms character, and the instinct towards that most democratic of things, story-telling. The task of fiction is to achieve is, by the power of the written word, a glimpse of truth that we didn't necessarily know was available to us. Part of Carey's genius is his ability to allow the reader to become the instigator of ideas. Parrot and Olivier in America is a fantastic riff on the servant/master relationship that can relate to Tocqueville, or to Hegel, or to Nietzsche’s "master morality," or indeed to the inanities of the Bush generation. Carey is well aware of the looking glass of history. Carey is here by being there. Whoever we are is whoever we have been. To label his work as "historical fiction" is to reduce the impact of what it means, and allows. He has his finger on the pulse. But not only that--he has shaped the vigorous graph of the beats.

I recall my first foray into the Carey world. It was back in the early 80's and I picked up a book called Bliss. Harry Joy's heart attack on his front lawn was my own in literature: it resuscitated me. From there I stepped into the lives of Oscar and Lucinda and then Jack Maggs. One of the greatest novels of the 20th century is The True History of the Kelly Gang which came in 2001 and is, without a doubt, an "adjectival" masterpiece. (I’m going to carry that book with me – along with DeLillo’s Underworld and Ondaatje’s Coming through Slaughter--to the gates of heaven or hell, whichever one will have me.) Recently Carey has written My Life as a Fake, Theft and His Illegal Self, all tours de force. What I love about his work is that it’s smart and funny at the same time. It’s always an adventure to read. I get transported out of myself, into a new world. The reader is allowed the dignity of exploration. It’s a form of travel, a manner of being away and remaining at home. I happen now to have the pleasure of teaching with Peter Carey at Hunter College in New York–-in fact, one of the reasons I’m at Hunter is that I wanted to teach alongside him, to shape my writing and reading, and to learn from him. I do so every time I read a book of his. He’s a master storyteller and a servant of language at the same time: he exists in that landscape with humility and grace. Parrot and Olivier in America is Peter Carey at his best: funny and tender and true.

Peter Carey is the author of ten previous novels and has twice received the Booker Prize. His other honors include the Commonwealth Writers’ Prize and the Miles Franklin Literary Award. Born in Australia, he has lived in New York City for twenty years.

1. Parrot and Olivier in America

2. Parrot and Olivier in America

3. Parrot and Olivier in America

4. Parrot and Olivier in America

5. Parrot and Olivier in America

6. Parrot and Olivier in America

7. Parrot and Olivier in America