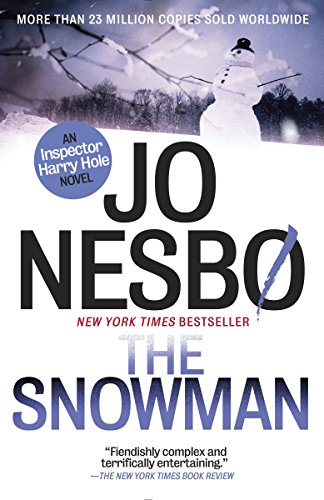 One night, after the first snowfall of the year, a boy named Jonas wakes up and discovers that his mother has disappeared. Only one trace of her remains: a pink scarf, his Christmas gift to her, now worn by the snowman that inexplicably appeared in their yard earlier that day.  Inspector Harry Hole suspects a link between the missing woman and a suspicious letter he’s received. The case deepens when a pattern emerges: over the past decade, eleven women have vanished—all on the day of the first snow. But this is a killer who makes his own rules . . . and he’ll break his pattern just to keep the game interesting, as he draws Harry ever closer into his twisted web. With brilliantly realized characters and hair-raising suspense, international bestselling author Jo Nesbř presents his most chilling case yet—one that will test Harry Hole to the very limits of his sanity.

Amazon Best Books of the Month, May 2011: The Snowman, Norwegian author Jo Nesbř's thriller, should please even the most die-hard Stieg Larsson fans. On the first day of snow, a child wakes up to find his mother has disappeared during the night. Outside, a snowman has appeared out of nowhere, the calling card of one of the most terrifying serial killers in recent fiction. A letter from the perpetrator draws Detective Hole further and further into the case, and together with his new partner, Katrine Bratt, he hunts the Snowman through twists and turns that become increasingly personal and may drive Hole to the brink of insanity. Brilliantly crafted, this credible and dark page-turner fully fleshes out the characters, especially Hole, a hardened detective with sharp instincts and real heart. What is the link between the victims? Is the Snowman a suspicious doctor, a notorious playboy, or one of Hole's peers on the force? The police keep thinking they've caught the criminal, but Hole's astute observations may steer him around the red herrings and right into the hands of the cold-as-ice killer. --Miriam Landis

JO NESBŘ is a musician, songwriter, and economist, as well as a writer. His Harry Hole novels include The Redeemer, The Snowman, The Leopard and Phantom, and he is also the author of several stand-alone novels and the Doctor Proctor series of children's books. He is the recipient of numerous awards, including the Glass Key for best Nordic crime novel.