Items related to Decisive: How to Make Better Choices in Life and Work

Decisive: How to Make Better Choices in Life and Work 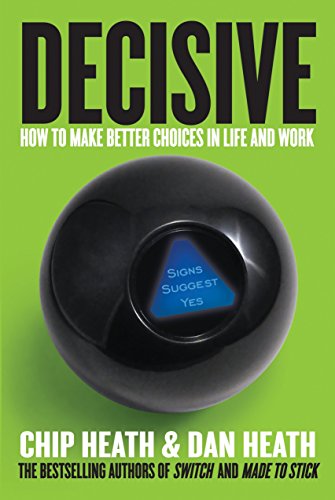 Chip and Dan Heath, the bestselling authors of Switch and Made to Stick, tackle one of the most critical topics in our work and personal lives: how to make better decisions.

Research in psychology has revealed that our decisions are disrupted by an array of biases and irrationalities: We’re overconfident. We seek out information that supports us and downplay information that doesn’t. We get distracted by short-term emotions. When it comes to making choices, it seems, our brains are flawed instruments. Unfortunately, merely being aware of these shortcomings doesn’t fix the problem, any more than knowing that we are nearsighted helps us to see. The real question is: How can we do better?

In Decisive, the Heaths, based on an exhaustive study of the decision-making literature, introduce a four-step process designed to counteract these biases. Written in an engaging and compulsively readable style, Decisive takes readers on an unforgettable journey, from a rock star’s ingenious decision-making trick to a CEO’s disastrous acquisition, to a single question that can often resolve thorny personal decisions.

Along the way, we learn the answers to critical questions like these: How can we stop the cycle of agonizing over our decisions? How can we make group decisions without destructive politics? And how can we ensure that we don’t overlook precious opportunities to change our course?

Decisive is the Heath brothers’ most powerful—and important—book yet, offering fresh strategies and practical tools enabling us to make better choices. Because the right decision, at the right moment, can make all the difference.

A. If you’re feeling indecisive, chances are you don’t have the right options yet. In the book we describe four key “villains” of decision-making—common traps and biases that psychologists have identified. One of them is called “narrow framing,” meaning that we tend to get stuck in one way of thinking about a dilemma, or we ignore alternatives that are available to us. With a little effort, we can break out of a narrow frame and widen our options. For instance, one expert we interviewed had a great quote: “Any time in life you’re tempted to think, ‘Should I do this OR that?,’ instead, ask yourself, ‘Is there a way I can do this AND that?’ It’s surprisingly frequent that it’s feasible to do both things.”

Q. You show that the same decision process can be applied to many domains—health decisions, career decisions, business decisions—but doesn’t a decision “process” take way too much time?

A. Not necessarily. In this book, we’re not interested in complex decision models or elaborate decision trees. Often the best advice is the simplest, for instance, the suggestion to “sleep on it.” That’s great advice—it helps to quiet short-term emotion that can disrupt our choices. But it still takes 8 hours, and it doesn’t always resolve our dilemmas. Many other decision aids require only a simple shift in attention. Doctors leaning toward a diagnosis are taught to check themselves by asking, “What else could this be?” And colleagues making a difficult group decision can ask, “What would convince us, six months down the road, to change our minds about this?”

Q. Why did you call the book Decisive?

A. Being decisive isn’t about making the perfect decision every time. That isn’t possible. Rather, it’s about being confident that we’ve considered the right things, that we’ve used a smart process. The two of us have met a lot of people who tell us they agonize endlessly about their decisions. They get stuck in a cycle where they just keep spinning their wheels. To escape that cycle, we often need a shift in perspective. We describe a simple technique used by former Intel chief Andy Grove to resolve one of the toughest business decisions he ever faced, one that he and his colleagues had debated for over a year. And what was this profound technique? Nothing fancier than a single, provocative question! In the book we also highlight a second question, inspired by Grove’s technique, that can often resolve personal decisions quickly and easily.

Q. So how do I help my teenage son not to make a bad choice?

A. Unfortunately, no one has solved that problem. But we offer some simple tools that help people give better decision advice. (Often it’s easier to spot the flaws in other people’s thinking than in our own.) As an example, the phrase “whether or not” is often a warning flag that someone is trapped in a narrow frame. So if your son is debating “whether or not to go to the party tonight,” that’s your cue to widen the options he’s considering. (Horror movie? School basketball game? A head-start on trigonometry coursework?) For important decisions, even a little improvement can pay big dividends.

CHIP HEATH is a professor at the Graduate School of Business at Stanford University. He lives in Los Gatos, California. DAN HEATH is a senior fellow at Duke University's Center for the Advancement of Social Entrepreneurship (CASE). He lives in Raleigh, North Carolina. The Heath brothers are the bestselling authors of Made to Stick and Switch.

1. Decisive: How to Make Better Choices in Life and Work [Hardcover] Heath Chip and Heath Dan

3. Decisive: How to Make Better Choices in Life and Work

4. Decisive : How to Make Better Choices in Life and Work

5. Decisive: How to Make Better Choices in Life and Work

6. Decisive: How to Make Better Choices in Life and Work

7. Decisive: How to Make Better Choices in Life and Work

8. Decisive: How to Make Better Choices in Life and Work

9. Decisive: How to Make Better Choices in Life and Work

10. Decisive: How to Make Better Choices in Life and Work