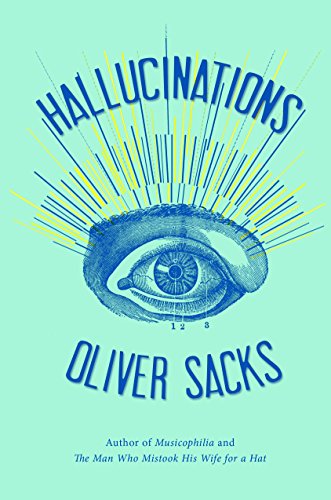 Have you ever seen something that wasn’t really there? Heard someone call your name in an empty house? Sensed someone following you and turned around to find nothing?

Hallucinations don’t belong wholly to the insane. Much more commonly, they are linked to sensory deprivation, intoxication, illness, or injury. People with migraines may see shimmering arcs of light or tiny, Lilliputian figures of animals and people. People with failing eyesight, paradoxically, may become immersed in a hallucinatory visual world. Hallucinations can be brought on by a simple fever or even the act of waking or falling asleep, when people have visions ranging from luminous blobs of color to beautifully detailed faces or terrifying ogres. Those who are bereaved may receive comforting “visits” from the departed. In some conditions, hallucinations can lead to religious epiphanies or even the feeling of leaving one’s own body.

Humans have always sought such life-changing visions, and for thousands of years have used hallucinogenic compounds to achieve them. As a young doctor in California in the 1960s, Oliver Sacks had both a personal and a professional interest in psychedelics. These, along with his early migraine experiences, launched a lifelong investigation into the varieties of hallucinatory experience.

Here, with his usual elegance, curiosity, and compassion, Dr. Sacks weaves together stories of his patients and of his own mind-altering experiences to illuminate what hallucinations tell us about the organization and structure of our brains, how they have influenced every culture’s folklore and art, and why the potential for hallucination is present in us all, a vital part of the human condition.

Amazon Best Books of the Month, November 2012: A familiar song on mental repeat, a shadowy movement in an empty house--many of us experience minor visual and auditory hallucinations and think nothing of it. Neurologist and professor Oliver Sacks concerns himself with those for whom such breaks with reality are acute and life altering. Dr. Sacks’ latest book--one of the most compelling in his fascinating oeuvre--centers on Charles Bonnet syndrome, a condition characterized by intricate visual hallucinations. Weaving together case studies with anecdotes from his own past and accessible medical explanations, Dr. Sacks introduces us to Sharon, whose vision is invaded by Kermit the Frog; Gertie, whose phantasmal gentleman caller visits each evening, bearing gifts; and a host of other patients whose experiences elicit both sympathy and self-reflection. (The good doctor also shares his own experiments with hallucinogenic drugs, to comic and insightful effect.) Hallucinations is Oliver Sacks at his best: as learned, introspective, and approachable as we could possibly imagine. --Mia Lipman

The Neurological and the Divine: An Interview with Oliver Sacks

The following is an excerpt from a Q&A with Dr. Sacks published on Omnivoracious, the Amazon Books blog. Click here to read the full interview.

Mia Lipman: In Hallucinations, you mention that your childhood migraines are one of the reasons you became a neurologist. How did they help shape your path?

Dr. Sacks: My experiences go back to my first memories of when I was three or four, suddenly seeing a brilliant zigzag which seemed to be vibrating, then enlarged and covered everything to one side. This has happened innumerable times since, but that first time was very terrifying...I know I was in the garden, and part of the garden wall seemed to disappear, and I asked my mother about it. She too had classical migraines, so she explained what it was about and said that it was benign and it would only last a few minutes, and I'd be none the worse. So though I'm not in love with the attacks, it's nice to know that one can live with this quite well.

So that early experience made you curious about why this was happening to you?

Indeed, and there were other experiences. Sometimes it was just color, perhaps in one half of the visual field, or things would be frozen and I couldn't see any movement. So I think this gave me a very early feeling that it's only the privilege of a normal brain which allows us to see the way we do—and that what seems to be a simple vision in fact must have dozens of different components, and any one of these can go down. So it was a learning experience for me as well.

Speaking of learning experiences, you talk in the book about a period in your 30s when you did a lot of hallucinogenic drugs—

Ah, I thought that would come up. [Laughing.]

Of course, it's the best part! I especially liked your description of the results as "a mix of the neurological and the divine." What did this self-experimentation teach you about your field, as well as personally?

I can't conceal that my motives were sort of mixed, but these were learning experiences as well as recreational ones, and occasionally terrifying ones. The gain, I think, [is that] it's a way of revealing various capacities and incapacities in the brain, including, perhaps, mystical ones...I quote William James, who, after taking nitrous oxide, said that it showed him there were many forms of consciousness other than rational consciousness, and that these seem to be uncovered one by one. And that's quite an experience. I do not recommend it to anybody, and I hope my writing about these things is not seen as a recommendation. I think I'm very lucky to have survived them, which several of my friends and contemporaries didn't.

> Continue reading "The Neurological and the Divine: An Interview with Oliver Sacks"

Oliver Sacks is a professor of neurology and psychiatry at Columbia University Medical Center and the author of many books, including Musicophilia, The Man Who Mistook His Wife for a Hat, and Awakenings (which inspired the Oscar-nominated film).