Items related to Edge of Honor 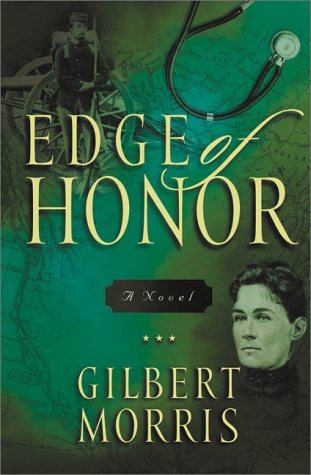 Quentin Larribee, a New York doctor who accidentally killed a surrendering Confederate officer during the Civil War, journeys South, plagued by guilt, to comfort the man's widow, finding love, danger, and a test of his faith.

Quentin Laribee is a surgeon -- one of the best. But in the confusion of one of the Civil War's last, desperate skirmishes, the hands devoted to healing bring death to William Breckenridge, an enemy soldier in the act of surrendering. Now the deed haunts Quentin. -- A bright future lies before him, with marriage to the lovely Irene Chambers and eventual ownership of her father's prosperous medical practice. But it cannot ease Quentin's troubled conscience. Honor compels him to see to the welfare of the dead man's family. -- Quentin moves from New York City to the little town of Helena, Arkansas, where he attempts to save the wife of Breckenridge and her children from financial ruin. But in trying to solve one problem, he creates another, falling in love with the widow of the man he killed -- a woman who knows nothing of his terrible secret. -- Two women beckon Quentin -- one to a life where his gift as a healer can prosper beyond his wildest dreams, the other to a truer but impossible love. --Edge of Honor is an unforgettable novel of redemption and honor, where good is found in the unlikeliest places and God's unseen hand weaves a masterful tapestry of human hearts and lives.

Gilbert Morris is one of today’s best-known Christian novelists, specializing in historical fiction. His best-selling works include the House of Winslow series, the Appomattox series, The Wakefield Saga, and Edge of Honor. He lives in Alabama with his wife, Johnnie.