Items related to Shades of Blue 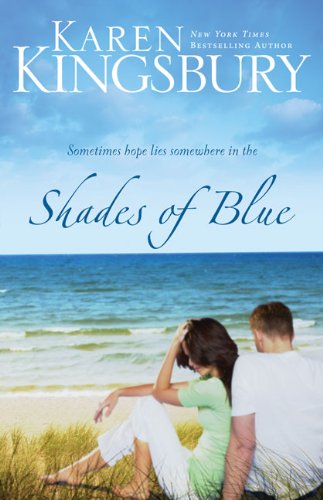 A fairytale future. A Checkered past. A decision awaits. Brad Cutler, twenty-eight, is a rising star at his New York ad agency, about to marry the girl of his dreams. Anyone would agree he has it all—a great career, a beautiful and loving fiancée, and a fairy tale life ahead of him ... when memories of a high school girlfriend begin to torment him. Lost innocence and one very difficult choice flood his conscience, and he is no longer sure what the future will bring except for this: He must go back to the shores of Holden Beach in search of his first love, and a forgiveness neither of them has ever known. Three people must work through the repercussions of a decision made long ago before any of them can look toward a new future.

New York Times best-selling author Karen Kingsbury is America’s favorite inspirational novelist with over 20 million books in print. Her Life-Changing Fiction™ has produced multiple best sellers including Unlocked, Leaving, Take One, Between Sundays, Even Now, One Tuesday Morning, Beyond Tuesday Morning, and Ever After, which was named the 2007 Christian Book of the Year. An award-winning author and newly published songwriter, Karen has several movies optioned for production, and her novel Like Dandelion Dust was made into a major motion picture and is now available on DVD. Karen is also a nationally known speaker with several women’s groups including Women of Faith. She lives in Tennessee with her husband, Don, and their five sons, three of whom are adopted from Haiti. Their daughter Kelsey is married to Christian artist Kyle Kupecky.

The author of more than 40 bestselling fiction titles whose combined sales hover near 15 million, Kingsbury takes her loyal faith-based fans on an exploration of the emotional and spiritual effects of abortion. Interestingly, the author frames the story through a young adult male character, Brad Cutler, an up-and-coming ad agency executive; he revisits a former relationship in which he encouraged his pregnant girlfriend to have an abortion. Years later, Brad continues to feel guilty, and as he readies to marry his fiancée, a new ad campaign for baby clothes has immobilized him. Emma, the former girlfriend, also cannot move past what happened. As the pressure mounts, Brad travels home and reunites with Emma to find closure, but what he discovers in the encounter is far more different than he hoped or expected. Kingsbury tackles a touchy, difficult topic, yet in her characteristic style, her gentle approach wins the day. It will also overcome any reader resistance, no matter what position one takes on this volatile issue. (Nov.)
Copyright © Reed Business Information, a division of Reed Elsevier Inc. All rights reserved.