Items related to A Shepherd Looks at Psalm 23

A Shepherd Looks at Psalm 23 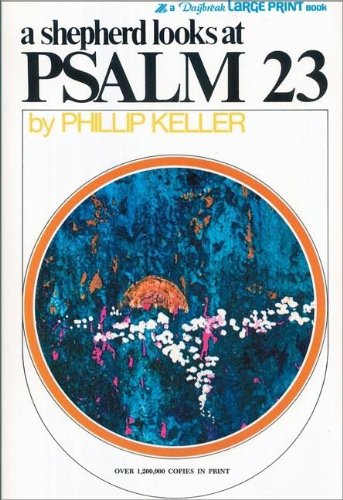 Large Print Edition. More than a quarter-century and 1.5 million copies since it was first published, A Shepherd Looks at Psalm 23 continues to inspire and encourage with its now-classic insights into the heart of the Good Shepherd, Jesus Christ. Drawing on what he learned during his own years as a shepherd, Phillip Keller leads and prods the reader to the green pastures of discovery and the cool waters of fulfillment hidden in the 'Shepherd Psalm.' Pleasure and enlightenment await those willing to follow his careful leading. Page by page, Keller reveals new facets of the Shepherd of Psalm 23 and his untiring expression of Christ's love for those who trust in him as their guide, protector, source of provision, and faithful keeper. Experience Psalm 23 in a new way. See with the Shepherd's eyes, touch with his hands, and feel with his heart through this intimate look into the person of our Lord, the Great Shepherd . . . and ourselves, the 'sheep of his pasture.'

W. Phillip Keller, born in East Africa, always loved wildlife and the outdoors. Having spent many years in agriculture research, land management, and ranch development in British Columbia, he later pursued careers in conservation, wildlife photography, and journalism. His experiences as a shepherd equipped him with the insights that are the basis for A Shepherd Looks at Psalm 23.

"The Lord Is My Shepherd"

The Lord! But who is the Lord? What is His character? Does He have adequate credentials to be my Shepherd—my manager—my owner?

And if He does—how do I come under His control? In what way do I become the object of His concern and diligent care?

These are penetrating, searching questions, and they deserve honest and basic examination.

One of the calamities of Christianity is our tendency to talk in ambiguous generalities.

David, the author of the poem, himself a shepherd and the son of a shepherd, later to be known as the "Shepherd King" of Israel, stated explicitly, "The Lord is my Shepherd." To whom did he refer?

He referred to Jehovah, the Lord God of Israel.

His statement was confirmed by Jesus the Christ. When He was God incarnate amongst men, He declared emphatically, "I am the good Shepherd."

But who was this Christ?

Our view of Him is often too small—too cramped—too provincial—too human. And because it is, we feel unwilling to allow Him to have authority or control—much less outright ownership of our lives.

He it was who was directly responsible for the creation of all things both natural and supernatural (see Colossians 1:15–20).

If we pause to reflect on the person of Christ—on His power and His achievements—suddenly like David we will be glad to state proudly, "The Lord—He is my Shepherd!"

But before we do this it helps to hold clearly in mind the particular part played upon our history by God the Father, God the Son, and God the Holy Spirit.

God the Father is God the author—the originator of all that exists. It was in His mind, first, that all took shape.

God the Son, our Saviour, is God the artisan—the artist, the Creator of all that exists. He brought into being all that had been originally formulated in His Father’s mind.

God the Holy Spirit is God the agent who presents these facts to both my mind and my spiritual understanding so that they become both real and relative to me as an individual.

Now the beautiful relationships given to us repeatedly in Scripture between God and man are those of a father to his children and a shepherd to his sheep. These concepts were first conceived in the mind of God our Father. They were made possible and practical through the work of Christ. They are confirmed and made real in me through the agency of the gracious Holy Spirit.

So when the simple—though sublime—statement is made by a man or woman that "The Lord is my Shepherd," it immediately implies a profound yet practical working relationship between a human being and his Maker.

It links a lump of common clay to divine destiny—it means a mere mortal becomes the cherished object of divine diligence.

This thought alone should stir my spirit, quicken my own sense of awareness, and lend enormous dignity to myself as an individual. To think that God in Christ is deeply concerned about me as a particular person immediately gives great purpose and enormous meaning to my short sojourn upon this planet.

And the greater, the wider, the more majestic my concept is of the Christ—the more vital will be my relationship to Him. Obviously, David, in this Psalm, is speaking not as the shepherd, though he was one, but as a sheep; one of the flock. He spoke with a strong sense of pride and devotion and admiration. It was as though he literally boasted aloud, "Look at who my shepherd is—my owner—my manager!" The Lord is!

After all, he knew from firsthand experience that the lot in life of any particular sheep depended on the type of man who owned it. Some men were gentle, kind, intelligent, brave, and selfless in their devotion to their stock. Under one man sheep would struggle, starve, and suffer endless hardship. In another’s care they would flourish and thrive contentedly.

To meditate on this I frequently go out at night to walk alone under the stars and remind myself of His majesty and might. Looking up at the star-studded sky I remember that at least 250,000,000 x 250,000,000 such bodies—each larger than our sun, one of the smallest of the stars—have been scattered across the vast spaces of the universe by His hand. I recall that the planet earth, which is my temporary home for a few short years, is so minute a speck of matter in space that if it were possible to transport our most powerful telescope to our nearest neighbor star, Alpha Centauri, and look back this way, the earth could not be seen, even with the aid of that powerful instrument.

All this is a bit humbling. It drains the "ego" from a man and puts things in proper perspective. It makes me see myself as a mere mite of material in an enormous universe. Yet the staggering fact remains that Christ, the Creator of such an enormous universe of overwhelming magnitude, deigns to call Himself my Shepherd and invites me to consider myself His sheep—His special object of affection and attention. Who better could care for me?

By the same sort of process I stoop down and pick up a handful of soil from the backyard or roadside. Placing it under an electron microscope I am astounded to discover it teems with billions upon billions of micro-organisms. Many of them are so complex in their own peculiar cellular structure that even a fraction of their functions in the earth are not yet properly understood.

Yes, He the Christ—the Son of God—brought all of this into being. From the most gigantic galaxy to the most minute microbe, all function flawlessly in accordance with definite laws of order and unity which are utterly beyond the mind of finite man to master.