Items related to The Jesus I Never Knew 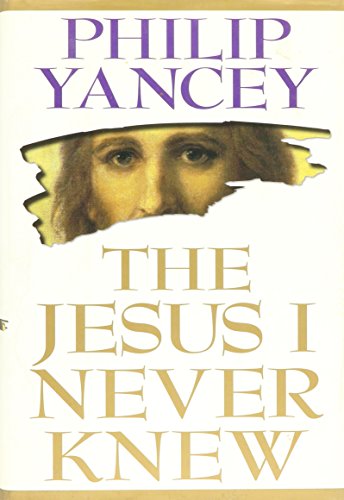 What happens when a respected Christian journalist decides to put his preconceptions aside and take a long look at the Jesus described in the Gospels? How does the Jesus of the New Testament compare to the ''new, rediscovered' Jesus -- or even the Jesus we think we know so well? Best-selling author Phillip Yancey says, 'The Jesus I got to know in writing this book is very different from the Jesus I learned about in Sunday school. In some ways he is more comforting; in some ways more terrifying.' Yancey offers a new and different perspective on the life of Christ and his work -- his teaching, his miracles, his death and resurrection -- and ultimately, who he was and why he came. Relating the gospel events to the world we live in today, The Jesus I Never Knew gives a moving and refreshing portrait of the central figure of history. With a willingness to tackle difficult questions, Yancey looks at the radical words of this itinerant Jewish carpenter and asks whether we are taking him seriously enough in our own day and age. From the manger in Bethlehem to the cross in Jerusalem, Yancey presents a complex character who generates questions as well as answers; a disturbing and exhilarating Jesus who wants to radically transform your life and stretch your faith. The Jesus I Never Knew uncovers a Jesus who is brilliant, creative, challenging, fearless, compassionate, unpredictable, and ultimately satisfying. This honest book will help you discover a different Jesus from the flannelgraph Sunday school figure, the sweetly smiling Victorian Savior, and all the cultural cliches that have tamed Jesus and kept him in comfortable religious boxes. According to Yancey, 'No one who meets Jesus ever stays the same. In the end I found the process of writing this book to be a great act of faith-strengthening. Jesus has rocked my own preconceptions and has made me ask hard questions about why those of us who bear his name don't do a better job of following him.'

An old adage says, "God created man in His own image and man has been returning the favor ever since." Philip Yancey realized that despite a lifetime attending Sunday school topped off by a Bible college education, he really had no idea who Jesus was. In fact, he found himself further and further removed from the person of Jesus, distracted instead by flannel-graph figures and intellectual inspection. He determined to use his journalistic talents to approach Jesus, in the context of time, within the framework of history.

In The Jesus I Never Knew, Yancey explores the life of Jesus, as he explains, "'from below,' to grasp as best I can what it must have been like to observe in person the extraordinary events unfolding in Galilee and Judea" as Jesus traveled and taught. Yancey examines three fundamental questions: who Jesus was, why he came, and what he left behind. Step by step, scene by scene, Yancey probes the culture into which Jesus was born and grew to adulthood; his character and mission; his teachings and miracles; his legacy--not just as history has told it, but as he himself intended it to be.

Yancey is not alone in his examination of the "real" Jesus. Publishing today is replete with writers committed to setting the story "straight,quot; joining countless others who, over the past 2,000 years, have determined to discover the truth about Jesus. But where others would deconstruct and discount, Yancey disarms and discloses. We become colleagues with him as he examines the accounts of the life of Jesus. And among the things that we discover is that Jesus himself leaves us few options: either he was who he said he was or he was nuts.

Philip Yancey was awarded the Gold Medallion Christian Book of the Year award for this book in 1996 by the Evangelical Christian Publishers Association. It's not the first, nor the last, award Yancey has won for his writing. But the writing is not necessarily the great gift of this book. Yancey allows the reader to discover, along with him, The Jesus I Never Knew. --Patricia Klein

Andrew Lloyd Webber cast him as a rock-n-roll rebel in the musical Jesus Christ Superstar, many Christians see him as a handsome European-looking man, and social justice groups place him next to Ghandi in his defense of the downtrodden. But, says Philip Yancey, the real Jesus would have left most people scratching their heads along with the disciples and asking, "Who is this guy?"

This is exactly the question Yancey asks in his new book The Jesus I Never Knew. Yancey's search for the real Jesus collides with the calm, cool, collected, and "loving hippie" notions of Jesus he saw in modern American culture. Instead, he finds a Galilean Jew born into apparent scandal making the most daring of claims: that he is the Way, the Truth, and the Light.

The Jesus I Never Knew developed out of a class Yancey led at LaSalle Street Church in Chicago, but finding the real Jesus has been Yancey's passion since childhood.

Yancey saw Him as a cardboard cut-out in Sunday School and a "cosmic Christ" in Bible college. Today he sees a world that marks its calendar around Jesus' birth and uses His name to intensify a curse. (Wouldn't it be odd to center a calendar around Napoleon's birth or to scream "Thomas Jefferson" in a shocking situation?).

"And yet," says Yancey, "I am not writing a book about Jesus because he is a great man who changed history. I am not tempted to write about Julius Caesar or the Chinese emperor who built the great wall. I am drawn to Jesus, irresistibly, because he has positioned himself at the dividing point of life-my life."

The Jesus I Never Knew looks at who Jesus was, why he came, and what he left behind. More than historical speculation or doctrinal recitation, Yancey asks the questions out of a personal desire to truly know Jesus.

"The Jesus I Knew has to be the greatest book I've read on the subject." Mark O. Hatfield, U.S. Senator, Oregon

THE JESUS I NEVER KNEW