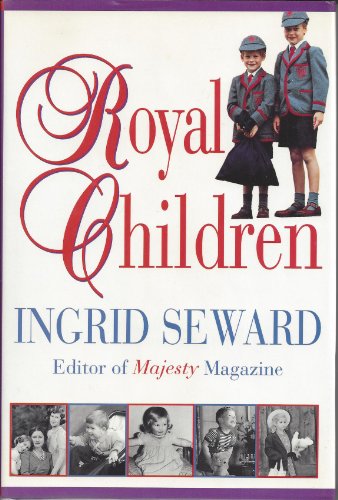 The words of the future King George VI echoed down through the generations, to be spoken again by his great-grandson, Prince William. "I don't want to be a king. I want to be a policeman," added the Prince.
But as his grandfather, Prince Philip admits, "However hard you try, it's almost impossible to bring them up as ordinary children." The "training" starts the moment they are born. It was in the nurseries of Sandringham, Windsor, Balmoral, and Buckingham Palace that the characters of generations of royal children were formed, and it was in those early years that the foundations for the troubled lives of Queen Elizabeth, Charles, Diana, Andrew, and Fergie were laid.
From Princess Elizabeth, who was never allowed to get dirty, to Prince Charles who, after the age of eight, was never again embraced by his mother, to Princes Harry and William, who must cope with the very public breakdown of their parents' marriage, royal children have lived with privileges and rigors unknown to any other child.
Previously unpublished photographs from the private collections of the royal family and the Windsor archives illustrate this fascinating portrait of a world where royal children were surrounded by extraordinary luxury but expected to behave at all times like miniature adults - a world that was rich and strange and unlikely ever to be seen again. Ingrid Seward's unprecedented access to the royal family - including exclusive interviews with its members as well as those who knew them in childhood, offers rare insight into the royal children - from the Queen to her grandchildren - and how their upbringing has contributed to today's turmoil.

How the British royal family was raised, from the Queen to her grandchildren, told by a seasoned Windsor watcher (Royal Style, 1988, etc.) and illustrated with previously unpublished photographs from the royal archives. George V, the Queen's grandfather, once said, ``My father was frightened of his father, I was frightened of my father, and I'm damned well going to see that my children are frightened of me.'' Here, Seward, editor of England's Majesty magazine, follows the evolution in royal thinking and practice from George's era (his eldest son, Edward, hated his father, abdicated, and married American divorc‚e Wallace Simpson), through that of the Queen, who was less distant and even sent her children out to ``public'' schools, down to the trendy ideas of Princess Diana. The author repeats much that is known already, but she also draws on her contacts in royal circles and particularly on her interviews with the royal ``nannies.'' These redoubtable women, often from a plebeian background, were the nurses who provided much of the emotional support that their charges could not get from their frequently absent parents, and who even in later years would remain as intimate friends and confidantes. Seward introduces us to a paradoxical world of privilege in which as a boy Prince Edward would wear his older brother's hand-me-downs and where sweets were only for special occasions. Much of the detail here is trivial for all but the most sentimental, yet the reader is occasionally challenged to reflect on the tensions for young people who must after all carry the symbolism of a nation and bear a burden of public duty and media attention that few of us would be willing to face. Anecdotal and at times poignant: of interest mainly to those for whom the intimacies of the British royal family fill an emotional need. (Sixteen pages of color and b&w photos--not seen) (First serial to National Enquirer) -- Copyright ©1993, Kirkus Associates, LP. All rights reserved.

Seward, editor of England's Majesty magazine, persuasively points out a source of the current well-publicized troubles among his country's royals: the nanny factor. From birth they are brought up not by their parents, but by "the spinster daughters of policemen and forestry workers." Competent and caring as these women may have been, Seward continues, this upbringing, with the nannies' emphasis on public manners and behavior befitting royal icons, stunted the children's emotional development. Interviews with members of the royal family and commentary of social observers inform this respectful look at a lifestyle that appears to be coming to an end. Photos not seen by PW. First serial to the National Enquirer.
Copyright 1994 Reed Business Information, Inc.