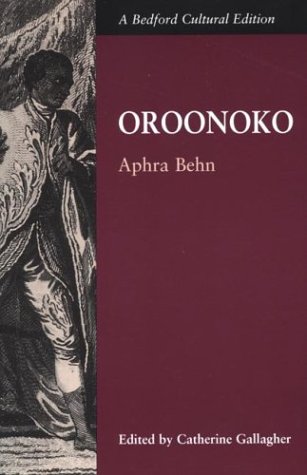 This edition of Aphra Behn’s Oroonoko features a generous selection of thematically organized historical materials including explorers’ descriptions of the “new world” of the Caribbean; planters’ accounts of the sugar colonies; firsthand accounts of the slave trade from Dutch and English traders and abducted Africans; and early abolitionist publications by Europeans and former slaves. Excerpts from works by Ben Jonson, John Dryden, Richard Steele, and Daniel Defoe enrich students’ understanding of the literary contexts for Behn’s portrayal of “blackness” in Oroonoko.

Aphra Behn was a prolific Restoration-era playwright and one of Englands first professional women writers. In 1663, she visited a Venezuelan sugar colony and met a slave trader, and what she saw there formed the basis for what is now her most famous work Oroonoko. Behn was a Catholic supporter and a Tory, a bisexual and a political spy.