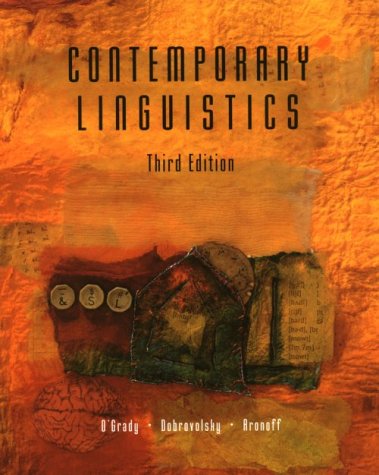 Offers a range of supplemental exercises and an answer key. Revised for the fifth edition.

Contemporary Linguistics : an introduction is a comprehensive, fully up-to-date introduction to linguistics. The book covers not only how language is structured, but also how it functions both socially and culturally, and how it is acquired and processed by speakers. It will prepare students to go on to more advanced work and, at the same time, will serve as a basic reference that students can continue to consult throughout their studies.

The text explores all the core areas of linguistics as well as numerous interdisciplinary and related areas.


A modular arrangement of the material facilitates the use of the book in courses at varying levels, and with differing emphasis. Each chapter contains basic information - so prior knowledge of the subject is not a prerequisite. However, many chapters include additional material which is flagged as 'advanced', to provide scope and challenge for those readers who wish to take the study further. Each chapter also contains clearly defined headings, a summary and an up-to-date bibliography. Hints which provide a valuable aid for solving analytical problems are included in the appendices, together with end-of-chapter exercises which allow the reader to learn by actually 'doing linguistics'. A detailed glossary of terms enables readers to check definitions and a language index (as well as a standard subject index) are provided at the back of the book.

Originally co-edited by William O'Grady and Michael Dobrovolsky, with contributions from other leading scholars, and published in Canada, this major textbook has beenfully adapted and updated by Francis Katamba for use in Britain and the rest of the world outside North America.

Contemporary Linguistics can be used from first year through to final year as a main text for students taking degree courses in linguistics, English language and cognitive science and by MA students on TEFL courses. It is also highly suitable for students taking language options in media and cultural studies modern language, psychology and philosophy, as well as for speech therapy courses.

WILLIAM O'GRADY teaches linguistics at the University of Hawaii at Manoa and is the author of several scholarly books. His research focuses on syntactic theory, language acquisition, and Korean.

JOHN ARCHIBALD, in addition to teaching linguistics at the University of Calgary, studies the acquisition of phonology and has written several books on the subject.

MARK ARONOFF is professor of linguistics at Stony Brook University and President of the Linguistic Society of America for 2005. He has written numerous articles and several books on aspects of linguistic morphology, as well as on orthography and the teaching of linguistics.

JANIE REES-MILLER is director of international programs at Marietta College, Ohio. In research and teaching, she is concerned with the interface between theory and practice and with making linguistics accessible to nonlinguists. She is coeditor with Mark Aronoff of ~The Handbook of Linguistics~.