Items related to Development Economics in Action: A Study of Economic...

Killick, Tony Development Economics in Action: A Study of Economic Policies in Ghana

Development Economics in Action: A Study of Economic Policies in Ghana 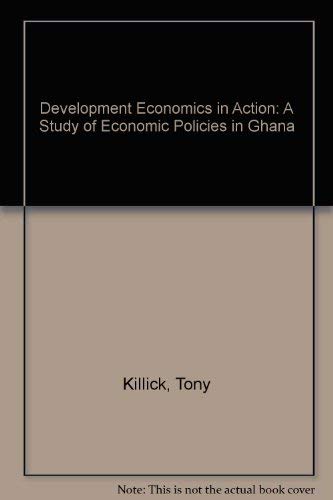 First published in 1978, Development Economics in Action is a renowned study of policies in Ghana, one of Africa’s most closely watched economies. In this new edition three additional chapters provide a detailed account of 1978-2008.

Professor Tony Killick is Senior Research Associate of the Overseas Development Institute, London, and consultant on development policy issues. In various capacities, he has enjoyed a long association with Ghana.

'Do ideas drive development? That was the question implied by the title of Tony Killick’s book on Ghana when it first came out in 1978. It is one of the topics worth revisiting on the occasion of the book’s republication, now with three new chapters covering the period 1972-2008.

Actually, the title lays down something of a false trail. As the subtitle more straightforwardly conveys, the book is an exploration of economic policies in post-independence Ghana – one of the most richly documented and meticulously analysed studies available for any African country in its critical post-colonial years. While the analysis establishes beyond doubt the importance of policy, it shows particularly clearly that policy needs to be understood as ‘what the government does’ and not in any of the more limited senses of the term. Ideas, if taken in the sense of de facto policies, are fundamental. The influence, for better or worse, of abstract ideas – development economics – is much more doubtful.

As the first edition showed in compelling fashion, nearly everything that went wrong with the Ghanaian economy during the first decade of independence was policy-induced – not the result of international constraints or poor initial resource endowments. Theories about international constraint and vicious circles of poverty are less influential than they were in the 1970s, but the finding remains important. The book also explored the proposition that Nkrumah and his successors were merely doing what was recommended by the mainstream development economics of the period. In this respect, however, the conclusions do not come down strongly in favour of the role of ideas.

It is certainly the case that several of the biggest names in early development economics not only constructed theories about the need for a state-led ‘big push’ of the sort that Nkrumah espoused but in several cases went on high-profile advisory missions to Ghana. However, Killick’s evidence does not suggest that this was a decisive influence. There was, to be sure, some ‘elective affinity’ between elements of Nkrumah’s African socialism and the market scepticism of Nurkse, Hirschman, Myrdal, Seers, Lewis and Kaldor. But Nkrumah and his advisers and immediate successors had visions and prejudices of their own. Killick rejects the idea being expressed at the time by Douglas Rimmer that the vision was just a smokescreen for what we would now call a predatory neopatrimonialism. Nevertheless, policy-in-practice was to a very large extent driven by certain basic characteristics of politics and the civil service in Ghana. In Killick’s view, these factors still operate today, several decades and many international policy shifts later.

This was and remains an important finding. It is a great merit of the book that its carefully marshalled detail allows readers to appreciate the weight of the evidence for themselves.

Already when Killick was writing, mainstream development-policy thinking had shifted sharply away from where it had been in the late 1950s and early 1960s. Ghana’s policies up to 1983 could not be suspected of having high-minded intellectual roots of any significant kind. But the position was transformed with the adoption of the first Economic Recovery Programme by the second Rawlings regime: suddenly, policy in Ghana was at the leading edge of a new global idea – structural adjustment. It did not quite retain that status after the country became in turn an early adopter of multi-party democracy in 1992; but policy has remained fairly firmly within the new international orthodoxy, far more aware of the costs and risks associated with disrupting markets, and hesitant about anything more than a facilitative and regulatory role for the state. Combined with the relative success of its style of multiparty politics, this has been sufficient to make Ghana once again a continental star – with the necessary panoply of impressive economic growth rates and improving social indicators.

The additional chapters tell this story well, although in less detail than the original book. The author is not immune to the optimism that surrounds Ghana these days. He appears more sanguine about the prospects than his writing suggested even five years ago. However, superficiality is not a Killick trait, and the troubling underside – and the elements of continuity with the earlier decades – shows through in the careful documentation. Policy today may be comfortably orthodox at the level of abstract ideas, but ‘implementation’ remains a problem. Under very different circumstances, the Achilles’ heel of policy-in-practice is much the same as it was in the 1960s.

The reasons are political and have deep roots. The very best international ideas, such as those suggested by any direct comparison of African and Asian development performance, are not being picked up and still less vigorously pursued. Agricultural transformation continues to be under-emphasised and badly managed. There is growth, currently boosted by a high gold price, but not much of the right sort of structural change. Living standards are improving, but Ghana is still underperforming as a modernising economy. This is the case despite the fact that Ghana has received massive quantities of international assistance over a quarter century (around 10% of GDP during 1988-2006) and now takes in, according to Killick’s estimates, a somewhat greater sum in remittances (pp. 451-6). How so?

Part of the answer is that over certain periods the aid funds have not been absorbed because of a combination of central bank wariness about Dutch Disease effects and the inability of the civil service to deliver enough ways of using foreign exchange productively. Killick gives reasons for doubting whether the competence and motivation of the bureaucracy are greater today than in the 1960s, despite major gains in higher and advanced education. By the end of the two terms of the supposedly business-oriented New Patriotic Party in 2008, the civil-service wage bill was absorbing more than half of domestic revenues, and represented 30% of government expenditure in 2006 (pp. 417, 468). But despite a succession of donor-financed reform initiatives, efficiency remains low, and this is not accidental: ‘The political arithmetic of neopatrimonialism is stacked heavily against doing what needs to be done in the civil service’ (p. 470).

The maturing of competitive politics has, as Killick tells it, produced some pressures on governments to perform better, for example in macroeconomic management. However, the democratic pressures remain more clientelistic than developmental. The resulting patterns of public expenditure, especially as revealed in budget outturns, are targeted with a view to retaining the support of particular groups. They are not geared to providing the institutional and material public goods that are most needed to support economic transformation. Many observers think that oil revenues will intensify this tendency.

So Ghana – representing the best of sub-Saharan Africa in many respects – will grow economically and become less poor, with the likely exception of the northern savannah. But in global terms this may amount to little more than bumping along the bottom. It will remain well short of potential, unless the low standard of continental averages in times of high commodity prices is accepted as defining the potential. Ideas may well have a role in altering this situation. But if Killick is right, the injection of fresh thinking that Ghana needs is not just about better policy economics (for example, a sharper appreciation of the implications of small market size). It is about how to discover a politics that can work under African conditions to shake up the institutions of the country. It is about getting the kind of leadership and operational dynamism in key ministries and public services that transformed the development prospects of several Asian countries, under a variety of formal regime types, back when Ghana was entering the abyss.

As this conclusion may help to illustrate, this book is of interest to a much wider readership than professional economists. It is an indispensable reference for anyone thinking seriously and unconventionally about African development options in the twenty-first century'.

1. Development Economics in Action : A Study of Economic Policies in Ghana

2. Development Economics in Action: A Study of Economic Policies in Ghana

Book Description Condition: Good. A+ Customer service! Satisfaction Guaranteed! Book is in Used-Good condition. Pages and cover are clean and intact. Used items may not include supplementary materials such as CDs or access codes. May show signs of minor shelf wear and contain limited notes and highlighting. Seller Inventory # 0312196822-2-4