Items related to Koolaids: The Art of War

Koolaids: The Art of War 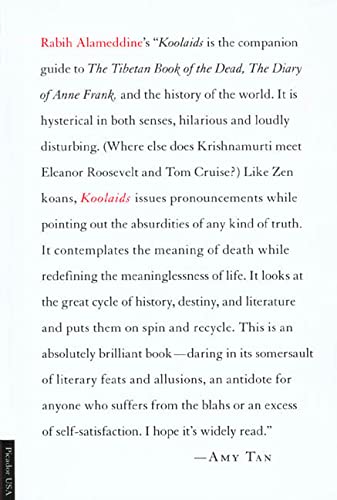 An extraordinary literary debut, this book is about the AIDS epidemic, the civil war in Beirut, death, sex, and the meaning of life. Daring in form as well as content, Koolaids turns the traditional novel inside out and hangs it on the clothesline to air.

Rabih Alameddine's "Koolaids is the companion guide to The Tibetan Book of the Dead, The Diary of Anne Frank, and the history of the world. It is hysterical in both senses, hilarious and loudly disturbing. (Where else does Krishnamurti meet Eleanor Roosevelt and Tom Cruise?) Like Zen koans, Koolaids issues pronouncements while pointing out the absurdities of any kind of truth. It contemplates the meaning of death while redefining the meaninglessness of life. It looks at the great cycle of history, destiny, and literature and puts them on spin and recycle. This is an absolutely brilliant book - daring in its somersault of literary feats and allusions, an antidote for anyone who suffers from the blahs or an excess of self-satisfaction. I hope it's widely read. Just think of the fascinating dinner conversations and epitaphs it could spawn. I think Kant, Jung, and Borges would approve." --Amy Tan

"Alameddine is a respected painter who brings great visual skill to his first literary work. The novel is really an effectively conceived collage of the viewpoints of several characters. ...War, death, sex in a morally empty and meaningless world--when mixed on Alameddine's palette, they make for fascinating reading." --Library Journal

"[T]he AIDS epidemic in America, and the Lebanese civil war, are combined here by debut novelist Alameddine into a provocative, emotionally searing series of connected vignettes ...For a nonlinear novel the images chosen retain a remarkable cohesion. Often sexually frank or jarringly violent, they merge into a graphic portrait of two cultures torn from the inside." --Publishers Weekly

"[A] refreshing statement of honesty and endurance ...funny, brave full of heart and willing to say things about war and disease, sexual and cultural politics that have rarely been said so boldly or directly before." --The Sunday Oregonian

"Koolaids is a wildly imaginative tour de force--impressive, stunning. Alameddine's is the authentic voice of the prophet, speaking from the man-made wilderness of the twentieth century. Like all great prophets, he speaks with equal parts anger and love. Dark and funny and despairing and literate, and finally, in its unvarnished truth, affirming: 'Amid all the craziness, I am here. We are here.'" --Fenton Johnson, author of Scissors, Paper, Rock and Geography of the Heart: A Memoir

"This is a fantastic novel that every American should read. In an era in which the most conventional yuppie fiction rooted in suburban angst is being passed off as the New American Literature, Alameddine shows how formal invention can derive organically from the emotions of the experiences at stake, and not glib device. Koolaids communicates with crystal clarity because the content reflects the need for justice. This is the kind of writing that can transform American culture." --Sarah Shulman, author of Rat Bohemia, Girls, Visions and Everything and Empathy

Rabih Almeddine is a successful painter who has had gallery shows throughout the United States, Europe and the Middle East. He lives is San Francisco. He is also the author of The Perv.

1. Koolaids: The Art of War

2. Koolaids: The Art of War

3. Koolaids: The Art of War

4. Koolaids: The Art of War