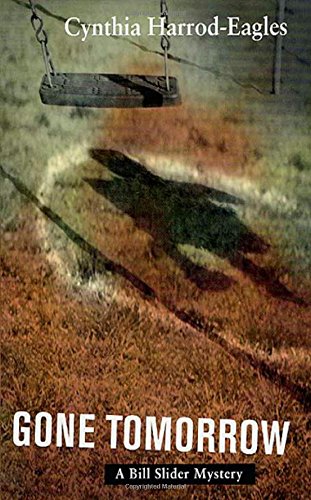 "All around, for miles and miles in every direction, in streets and shops and houses, real life was going on, oblivious; but here a dead man sat, the full stop at the end of his own sentence, with a little still pocket of attention focused fiercely and minutely on him. Why him? And why here? Slider felt the questions attaching themselves to him like shackles, chaining him to this scene, to a well-known process of effort, worry and responsibility."

Detective Inspector Bill Slider returns in another thrilling mystery from the prolific pen of Cynthia Harrod-Eagles.

In the heart of Shepherd's Bush, London-Slider's patch-a groundskeeper discovers a well-dressed man seated on a children's swing. Problem is, the man is dead, a single, perfect stab-wound to the heart. Even more mysteriously, someone has clearly rummaged through the man's pockets-but left behind over a thousand pounds in cash.

Initial investigations confront a wall of silence, but this only fuels Slider and his team's determination to solve the case before it gets taken off their hands and they face failure on their own doorstep. The task is made no easier by Slider's qualms over his long-distance romance, or by Detective Superintendent Fred "The Syrup" Porson's mysterious absence from work for the first time in as long as Slider remembers.

As Slider unearths the victim's sordid lifestyle of debts, drugs, and dodgy deals, the trail leads the police through London's neighborhoods, from the seedy pubs of Shepherd's Bush through the brothels of Notting Hill to the mansions of Holland Park. As they probe deeper the body count rises and Slider suspects the machinations of a crime baron who will stop at nothing to keep his identity hidden.

Cynthia Harrod-Eagles was born and educated in Shepherd's Bush, London and had a variety of jobs in the commercial world, starting as a junior cashier at Woolworth's and working her way down to Pensions Officer at the BBC. She won the Young Writer's Award in 1973, and became a full-time writer in 1978. She is the author of sixty successful novels to date, including the twenty-five volumes of the Morland Dynasty series.

When a body turns up in a gated Shepherd's Bush playground in the ninth compelling Bill Slider police procedural from Harrod-Eagles (Blood Sinister, etc.), DI Slider and his workaholic staff quickly realize that the victim was an unlikely candidate for murder. The baffling case of unlucky Lenny, a small-time dealer in stolen goods and drugs, blows open when, through a fortuitous but believable coincidence, Slider's sidekick and best friend, Det. Supt. Jim Atherton, discovers a connection between the victim and a mysterious crime syndicate. The meat of the story is how the methodical, intuitive Slider and his people identify the ringleader and unravel the mechanics of his organization, which ensures loyalty by viciously threatening its members. Woven into the story are Slider's personal problems-the tense relationship with his ex-wife, the imposition of his career on the limited time with his two children, the frustrating long-distance love-affair with Joanna, a violinist now playing with a Dutch orchestra-and those of commitment-shy Atherton. The author writes complex puzzles that are lightened with pungent wit, setting the scenes and bringing her characters to life with vivid descriptions (a twitchy, muscular man in a tight black shirt "looked like an unusually well-dressed sack of ferrets"). Although Slider and Atherton often overanalyze, their attention to detail pays off. This satisfying novel ends with surprising personal changes for both of them.
Copyright 2002 Reed Business Information, Inc.