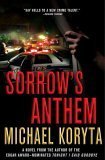 In the beginning it was all about money. Then things got personal.

This is the story that Ed Gradduk tells his best friend, and private investigator, Lincoln Perry. Ed is on the run, hiding from the police who intend to arrest him for arson and murder.

When Gradduk is killed in a violent confrontation with police, Perry cannot shake his friend's death and vows to understand the forces that brought him down.

With an intense exploration of both character and crime, Sorrow's Anthem establishes Michael Korya as one of the top young mystery writers in America today.

THE AMBULANCE, THE FIRE ENGINE, THE POLICE CARS―
Once Lincoln Perry and Ed Gradduk were friends. Then Perry became a cop, Gradduk turned dangerous, and their friendship imploded. Now, Gradduk is dead. And Perry wants to use his PI license to prove that whatever else his childhood friend might have been, he wasn't a murderer.

ALL TOGETHER, THEY SOUND LIKE A SAD, CRAZY SONG....
For the police, this case is over. The woman Gradduk is alleged to have killed can't tell her side of the story, and the building she entered with him has burned to the ground. But Perry is making connections to a wave of arson that struck Cleveland seventeen years ago―fires that lit up the dark secrets of two families, a local powerbroker, and at least one crooked cop. Now Perry and his partner can see ties between the past and present, between innocents and criminals―and sirens that keep playing...

"Inspired by Hammett and Chandler, the 22-year-old Koryta displays the maturity of a writer with several novels under his belt, and his plot percolates with crisp dialogue that might impress Chandler himself."―Booklist (Starred Review)

Twenty-two year old Michael Koryta lives in Bloomington, Indiana. While in high school he began to work both for a private investigator and for the local newspaper, and he still has those jobs.