Items related to Time Was Soft There: A Paris Sojourn at Shakespeare...

Mercer, Jeremy Time Was Soft There: A Paris Sojourn at Shakespeare & Co.

Time Was Soft There: A Paris Sojourn at Shakespeare & Co. 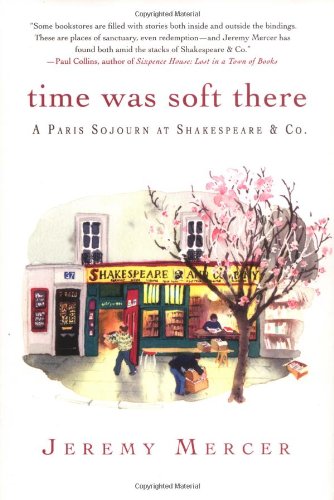 "Some bookstores are filled with stories both inside and outside the bindings. These are places of sanctuary, even redemption---and Jeremy Mercer has found both amid the stacks of Shakespeare & Co."
---Paul Collins, author of Sixpence House: Lost in a Town of Books

In a small square on the left bank of the Seine, the door to a green-fronted bookshop beckoned. . . .

With gangsters on his tail and his meager savings in hand, crime reporter Jeremy Mercer fled Canada in 1999 and ended up in Paris. Broke and almost homeless, he found himself invited to a tea party amongst the riffraff of the timeless Left Bank fantasy known as Shakespeare & Co. In its present incarnation, Shakespeare & Co. has become a destination for writers and readers the world over, trying to reclaim the lost world of literary Paris in the 1920s. Having been inspired by Sylvia Beach's original store, the present owner, George Whitman, invites writers who are down and out in Paris to live and dream amid the bookshelves in return for work. Jeremy Mercer tumbled into this literary rabbit hole and found a life of camaraderie with the other eccentric residents, and became, for a time, George Whitman's confidante and right-hand man.

Time Was Soft There is one of the great stories of bohemian Paris and recalls the work of many writers who were bewitched by the City of Light in their youth. Jeremy's comrades include Simon, the eccentric British poet who refuses to give up his bed in the antiquarian book room, beautiful blonde Pia, who contributes the elegant spirit of Parisian couture to the store, the handsome American Kurt, who flirts with beautiful women looking for copies of Tropic of Cancer, and George himself, the man who holds the key to it all. As Time Was Soft There winds in and around the streets of Paris, the staff fall in and out of love, straighten bookshelves, host tea parties, drink in the more down-at-the-heels cafés, sell a few books, and help George find a way to keep his endangered bookstore open. Spend a few days with Jeremy Mercer at 37 Rue de la Bucherie, and discover the bohemian world of Paris that still bustles in the shadow of Notre Dame.

"Jeremy Mercer has captured Shakespeare & Co. and its complicated owner, George Whitman, with remarkable insight. Time Was Soft There is a charming memoir about living in Whitman's Shakespeare & Co. and the strange, broken, lost, and occasionally talented, eccentrics and residents of this Tumblewood Hotel."
---Noel Riley Fitch, author of Sylvia Beach and the Lost Generation: A History of Literary Paris in the Twenties & Thirties

"There does seem to be something about the odd ducks that work at bookstores. Jeremy Mercer has captured the story of a wonderful, unique store that could only be born out of a love for books and the written word."
--- Liz Schlegel, the Book Revue bookshop, Huntington, New York

Jeremy Mercer was formerly a journalist for the Ottowa Citizen. He is the author of two crime books and a founder of Kilometer Zero, a cult literary magazine currently being published out of Shakespeare & Co.

Time Was Soft There
1.It was a gray winter Sunday when I came to the bookstore.As had been my habit during that troubled time, I was out walking. There was never a specific destination, merely an accumulation of random turns and city blocks to numb the hours and distract from the problems at hand. It was surprisingly easy to forget oneself among the bustling markets and grand boulevards, the manicured parks and marble monuments.On this particular day, a thin drizzle had begun falling early in the afternoon. At first, it was barely enough to wet the wool of a sweater, let alone interrupt this serious business of walking. But later, toward dusk, the skies abruptly thundered and opened into a downpour. Shelter was needed, and from where I'd been caught near the cathedral of Notre Dame, the yellow-and-green shop sign could just be glimpsed on the other side of the river.By then, I'd been in Paris a month, long enough to hear vague rumors about the legendary bookstore. I'd been intrigued, of course, and had often meant to visit. Yet as I crossed the bridge, with the wind whipping at my pant legs and umbrellas sprouting around me, these rumors were far from mind. My only thought was to escape the storm and idle the rainy minutes away.Out in front of the store, a tour group bravely posed for one last round of photographs. They used thick guidebooks to shield their cameras and their teeth were clenched into chattering smiles. Onewoman glared from beneath the hood of a rain slicker as her husband twisted a complicated lens. "Hurry," she urged. "Just hurry."Through the fog of the shop's main window, there could be seen a blur of warm light and moving bodies. To the left stood a narrow wooden door, its green paint wrinkled and chipped. With a faint creak, it swung open to reveal a modest delirium.A glittering chandelier hung from a cracked wooden ceiling beam, while in the corner an obese man squeezed rainwater from his turquoise muumuu. A horde of customers circled the desk, clamoring for the clerk's attention in a loud mash of languages. And the books. The books were everywhere. They sagged from wooden shelves, spilled from cardboard boxes, teetered in tall piles on tables and chairs. Stretched along the windowsill and taking in this mad scene was a silky black cat. I swear it looked up at me and winked.There was a sudden spray of wind as the tour group pushed inside the store. I was bounced forward, past the crowded desk, then up two stone stairs painted with the words LIVE FOR HUMANITY and through into a large central room. Here, tables and shelves overflowed with more books, two doorways led deeper into the store, and a murky skylight was set overhead. Most unusual was what this skylight cast down upon: an iron-rimmed wishing well, where a man on bended knee was clawing out coins of high denomination. As I approached, he glared up at me and quickly shielded his bounty with a crooked arm.Giving this fellow wide berth, I entered a narrow passage and found myself surrounded by books written in what appeared to be Russian. A wrong turn took me down a dead end to a sink surrounded by stacks of yellowed nature magazines. There was a soapy razor lying on an issue featuring the jungles of Madagascar. A dab of foam added an unnatural spot to a reclining leopard.Backing up, I arrived at a wall of German novels, then, stumbling slightly, there was another turn and a loose pyramid of glossy-covered art books. To one side was a stained-glass alcove with a bare bulb flickering inside. A woman was crouched there, muttering in Italian and trying to decipher the book titles in this shaky light.Finally, after stepping through another doorway, I was back in the room with the wishing well. The man who plunged his hand in the coins had vanished, but now the tour group had surged ahead and laid claim to the space. Half-blinded by flashing cameras, I was jostled among wet shoulders as they herded past me and into the very labyrinth from which I'd just emerged.It was at this juncture that I decided a café would be a calmer harbor from the storm. Making a cautious retreat past the clerk and the winking black cat, I went back out the green door. The sting of rain made me pause to reconsider, and as I stood huddled in the doorway, I noticed a wooden bookcase drilled into the wall beside the store window. The paperbacks were damp and bloated, but they cost just twenty-five francs, a sum even I could afford in those desperate days. A copy of A Portrait of the Artist as a Young Man edged out at me. Guessing it would be an inexpensive way to swallow time, I ventured back inside.When it came my turn to be served, the young woman at the desk gave me a bright smile and folded open the cover of my book. With meticulous care, she stamped the title page with the crest of the Shakespeare and Company bookstore. Then she invited me upstairs for tea.TIME WAS SOFT THERE. Copyright © 2005 by Jeremy Mercer. All rights reserved. Printed in the United States of America. No part of this book may be used or reproduced in any manner whatsoever without written permission except in the case of brief quotations embodied in critical articles or reviews. For information, address Picador, 175 Fifth Avenue, New York, N.Y. 10010.

1. Time Was Soft There: A Paris Sojourn at Shakespeare & Co.

2. Time Was Soft There: A Paris Sojourn at Shakespeare & Co.

3. Time Was Soft There: A Paris Sojourn at Shakespeare & Co.

4. TIME WAS SOFT THERE: A PARIS SOJ