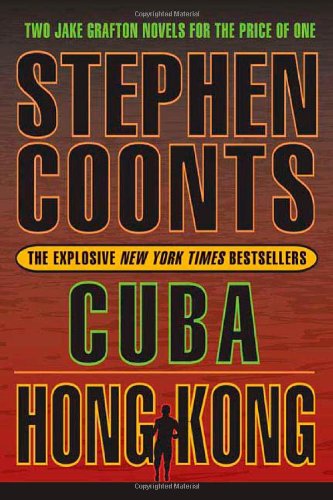 Cuba Stephen Coonts' bestelling novels takes readers into the heart of harrowing, pulse-pounding action, whether on land, on sea, or in the air. Now, this master of full-tilt, blockbuster suspense turns into a lush setting 90 miles from U.S. soil. In Cuba, Fidel Castro lies dying. Human sharks are circling. And one man has his finger on the trigger of a weapon that will change everything...

Admiral Jake Grafton is overseeing a shipment of nerve gas being transferred for a top-secret U.S. stockpile at Guantanamo Bay. But a power struggle inside Cuba has ignited an explosive plot and turned a horrific new weapon on the U.S. Now, Jake must strap himself into the cockpit of a new generation of American aircraft and fly blind into the heart of an island that is about to blow--and take the whole world with it... Hong Kong Jake Grafton takes his wife, Callie, along when the U.S. government sends him to Hong Kong to find out how deeply the U.S. consul-general is embedded in a political money-raising scandal. And why not? Jake and Callie met and fell in love in Hong Kong during the Vietnam War, and the consul-general is an old friend from those days, Tiger Cole.

The Graftons quickly discover that Hong Kong is a powder keg ready to explode. A political murder and the closure of a foreign bank by the communist government are the sparks that light the fuse . . . and Tiger Cole is right in the middle of the action.

When Callie is kidnapped by a rebel faction, Jake finds himself drawn into the vortex of a high-tech civil war. Drawing on the skills of CIA operative Tommy Carmellini, in order to save his wife Jake Grafton must figure out who he can trust-both among the Western factions vying for control of the volatile situation, and among the Chinese patriots fighting for their nation's future-and make sure the right side wins.

Stephen Coonts is the author of 14 New York Times bestsellers, the first of which was the classic flying tale, FLIGHT OF THE INTRUDER. Born in 1946, Stephen Paul Coonts grew up in Buckhannon, West Virginia, a coal-mining town of 6,000 population on the western slope of the Appalachian mountains. He majored in political science at West Virginia University, graduating in 1968 with an A.B. degree. Upon graduation he was commissioned an Ensign in the U.S. Navy and began flight training in Pensacola, Florida. He received his Navy wings in August, 1969. After completion of fleet replacement training in the A-6 Intruder aircraft, Mr. Coonts reported to Attack Squadron 196 at NAS Whidbey Island, Washington. He made two combat cruises aboard USS Enterprise during the final years of the Vietnam War as a member of this squadron. After the war he served as a flight instructor on A-6 aircraft for two years, then did a tour as an assistant catapult and arresting gear officer aboard USS Nimitz. He left active duty in 1977 and moved to Colorado. After short stints as a taxi driver and police officer, he entered the University of Colorado School of Law in the fall of 1977.