Items related to Our Iceberg Is Melting 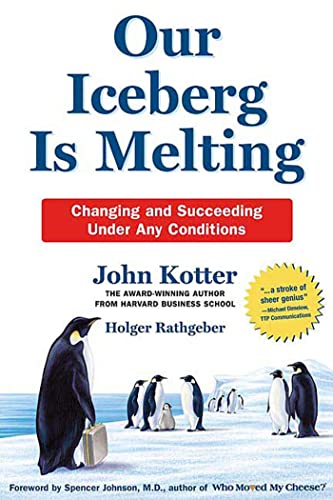 Most of the denizens of the Antarctic penguin colony sneer at Fred, the quiet but observant scout who detects worrying signs that their home, an iceberg, is melting.  Fred must cleverly convince and enlist key players, such as Louis, the head penguin; Alice, the number two bird; the intractable NoNo the weather expert; and a passle of school-age penguins if he is to save the colony.

Their delightfully told journey illuminates in an unforgettable way how to manage the necessary change that surrounds us all. Simple explanatory material following the fable enhances the lasting value of these lessons.Our Iceberg Is Melting is at once charming, accessible and profound; a treat for virtually any reader.

About the Author
John Kotter has been on the faculty at Harvard Business School since 1972. He is the author of eleven award-winning titles and frequently gives speeches and seminars at Harvard and around the world. He lives in Cambridge, Massachusetts. Holger Rathgeber spent his early professional career in Asia. He has worked in industry since the early 1990's and is now with one of the leading medical technology companies, Bectom Dickinson. Raised in Frankfurt, Germany, Rathgeber currently resides in White Plains, New York.

"I came across Our ICEBERG IS MELTING in May, ordered and dsitributed 60 copies in June, evaluated its effect on our change effort, and then ordered 500 more copies in September. This is a gem."
-- Heidi King, Program Manager, Dept. of Defense

"As a result of the book and my sharing it with a few people in the organization, we have moved quickly on several fronts. We are galvanized to go ahead instead of further studying, more organizing and so on. It is making a difference for us."
-- Tom Curley, President and CEO, Associated Press

"This is the easiest to read yet most informative book I have ever seen. Setting one of management's biggest challenges, 'what problem, I don't see a problem,' in the context of a melting iceberg and a determined penguin, was a stroke of sheer genius."
-- Michael Dimelow, Director of Product Marketing, TTP Communications PLC

Our Iceberg Is Melting: Changing and Succeeding Under Any Conditions (Kotter, Our Iceberg is Melting)

Our Iceberg Is Melting: Changing and Succeeding Under Any Conditions (Kotter, Our Iceberg is Melting)

Book Description Soft cover. Condition: New. Peter Mueller (illustrator). ADVANCED READER'S EDITION. ADVANCE READER'S EDITION - NEW & UNREAD - no flaws or defects - SOFT COVER IN PICTORIAL WRAPS as issued. ALL BOOKS HAVE BEEN BOXED IN CLIMATE CONTROLLED STORAGE AND HAVE NOT BEEN TOUCHED BY ANY OTHER HUMAN THAN ME FOR AT LEAST THE LAST 10 YEARS - ALL BOOKS ARE SEALED AND BUBBLE WRAPPED AND SHIPPED IN BOXES - YOU CAN BUY HERE WITH CONFIDENCE KNOWING THAT A BUNCH OF RANDOM PEOPLE HAVE NOT TOUCHED YOUR BOOK - WE ALSO ACCEPT OFFERS ON OUR BOOKS, BECAUSE WE WANT TO HELP DURING THIS LOCKDOWN WHERE WE ARE PRACTICING SOCIAL DISTANCING -. Seller Inventory # 007402