Items related to America: A Concise History, Volume 1: To 1877 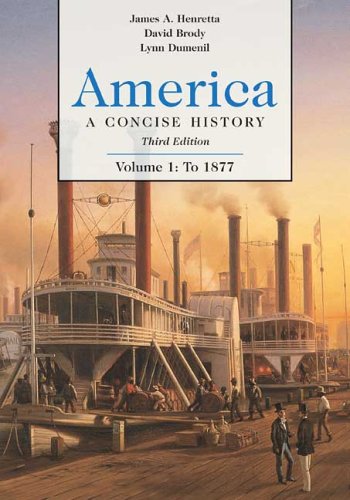 America: A Concise History has become the best-selling brief book for the U.S. History survey because of the uncommon value it offers instructors and students alike. The authors’ own abridgement preserves the analytical power of the parent text, America’s History, while offering all the flexibility of a brief book. The latest scholarship, hallmark global perspective, and handy format combine with the best full-color art and map program of any brief text to create a book that students read and enjoy.

JAMES A. HENRETTA is Priscilla Alden Burke Professor of American History at the University of Maryland, College Park. He received his undergraduate education at Swarthmore College and his Ph.D. from Harvard University. He has taught at the University of Sussex, England; Princeton University; UCLA; Boston University; as a Fulbright lecturer in Australia at the University of New England; and at Oxford University as the Harmsworth Professor of American History. His publications include The Evolution of American Society, 1700–1815: An Interdisciplinary Analysis; "Salutary Neglect": Colonial Administration under the Duke of Newcastle; Evolution and Revolution: American Society, 1600–1820; and The Origins of American Capitalism. Recently he coedited and contributed to a collection of original essays, Republicanism and Liberalism in America and the German States, 1750–1850, as part of his larger research project on "The Liberal State in America: New York, 1820–1975." In 2002–2003, he held the John Hope Franklin Fellowship at the National Humanities Center in North Carolina.

DAVID BRODY is Professor Emeritus of History at the University of California, Davis. He received his B.A., M.A., and Ph.D. from Harvard University. He has taught at the University of Warwick in England, at Moscow State University in the former Soviet Union, and at Sydney University in Australia. He is the author of Steelworkers in America; Workers in Industrial America: Essays on the 20th Century Struggle; and In Labor's Cause: Main Themes on the History of the American Worker. He has been awarded fellowships from the Social Science Research Council, the Guggenheim Foundation, and the National Endowment for the Humanities. He is past president (1991–1992) of the Pacific Coast branch of the American Historical Association. His current research focuses on labor law and workplace regimes during the Great Depression.