Items related to Natasha's Dance: A Cultural History of Russia 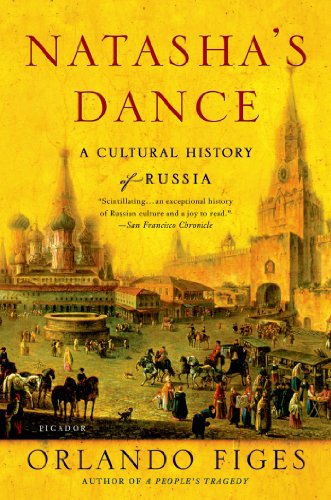 Beginning in the eighteenth century with the building of St. Petersburg and culminating with the Soviet regime, Figes examines how writers, artists, and musicians grappled with the idea of Russia itself--its character, spiritual essence, and destiny. Skillfully interweaving the great works--by Dostoevsky, Stravinsky, and Chagall--with folk embroidery, peasant songs, religious icons, and all the customs of daily life, Figes reveals the spirit of "Russianness" as rich and uplifting, complex and contradictory--and more lasting than any Russian ruler or state.

Orlando Figes is the author of A People's Tragedy, and recipient of the Wolfson Prize for History and the Los Angeles Times Book Prize, among others. A regular contributor to The New York Times, The Washington Post, and The Times Literary Supplement, he is a professor of history at the University of London. He lives in Cambridge, England.

"With the shift of political power to St. Petersburg, Moscow became the capital of the good life for the nobility. Its grandees gave themselves to sensual amusement. Count Rakhmanov, for example, spent his whole inheritance in eight years of gastronomy. He fed his poultry with truffles. He kept his crayfish in cream and parmesan instead of water. And he had his favorite fish, found only in the Sosna River a thousand miles away, delivered live to Moscow every day. Count Stroganov gave 'Roman dinners'—his guests lay on couches and were served by naked boys. Caviar and herring cheeks were typical hors d'oeuvres. Next came salmon lips, bear paws, and roast lynx. Then they had cuckoos roasted in honey, halibut liver, and burbot roe; oysters, poultry, and fresh figs; salted peaches and pineapples. Afterward, they would go into the banya and drink, eating caviar to build up a real thirst . . . Petersburgers despised Moscow for its sinful idleness, yet no one could deny its Russian character."

5. Natasha's Dance: A Cultural History of Russia (Paperback or Softback)