Items related to Out Stealing Horses: A Novel

Petterson, Per Out Stealing Horses: A Novel

Out Stealing Horses: A Novel 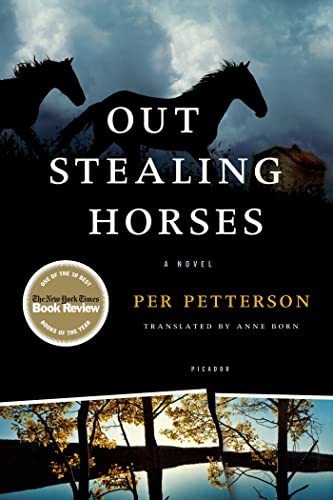 We were going out stealing horses. That was what he said, standing at the door to the cabin where I was spending the summer with my father. I was fifteen. It was 1948 and oneof the first days of July.

Trond's friend Jon often appeared at his doorstep with an adventure in mind for the two of them. But this morning was different. What began as a joy ride on "borrowed" horses ends with Jon falling into a strange trance of grief. Trond soon learns what befell Jon earlier that day―an incident that marks the beginning of a series of vital losses for both boys.

Set in the easternmost region of Norway, Out Stealing Horses begins with an ending. Sixty-seven-year-old Trond has settled into a rustic cabin in an isolated area to live the rest of his life with a quiet deliberation. A meeting with his only neighbor, however, forces him to reflect on that fateful summer.

PER PETTERSON has written five novels, which have established his reputation as one of Norway's best fiction writers. Out Stealing Horses won the Norwegian Booksellers Prize, the Critics Award for best novel, and the Independent Foreign Fiction Prize.

*Starred Review* Three years after his wife's accidental death, Trond Sander, 67, settles into an isolated cabin near Norway's southeastern border with Sweden. It's where he last saw his father at the end of summer 1948. Then 15 and full grown, Trond helped harvest the timber—too early, perhaps, but necessarily, it came to seem later. He also suddenly lost his local best friend, Jon, when, after an early morning spent "stealing horses"—that is, taking an equine joyride—Jon inadvertently allowed a gun accident that killed one of his 10-year-old twin brothers and guiltily ran away to sea. When that summer was over, Trond went back to Oslo, but his father stayed with Jon's mother, his lover since they met in the Resistance during World War II. Segueing with aplomb between his present and past, Trond's own narration is literarily distinguished, arguably to a fault; would a businessman, even one who loves Dickens, write this well? The novel's incidents and lush but precise descriptions of forest and river, rain and snow, sunlight and night skies are on a par with those of Cather, Steinbeck, Berry, and Hemingway, and its emotional force and flavor are equivalent to what those authors can deliver, too. Olson, Ray

1. Out Stealing Horses: A Novel Petterson, Per and Born, Anne

2. Out Stealing Horses: A Novel

3. Out Stealing Horses. [Paperback] Petterson, Per

Book Description Picador, 2008. Condition: New. NAMED ONE OF THE TEN BEST BOOKS OF THE YEAR BY THE NEW YORK TIMES BOOK REVIEW, A TIME MAGAZINE BEST BOOK OF THE YEAR, WINNER OF THE IMPAC DUBLIN LITERARY AWARD. Out Stealing Horses has been embraced across the world as a classic, a novel of universal relevance and power. Panoramic and gripping, it tells the story of Trond Sander, a sixty-seven-year-old man who has moved from the city to a remote, riverside cabin, only to have all the turbulence, grief, and overwhelming beauty of his youth come back to him one night while he's out on a walk. From the moment Trond sees a strange figure coming out of the dark behind his home, the reader is immersed in a decades-deep story of searching and loss, and in the precise, irresistible prose of a newly crowned master of fiction. Seller Inventory # 9780312427085

4. Out Stealing Horses: A Novel

5. Out Stealing Horses: A Novel

6. Out Stealing Horses: A Novel

7. Out Stealing Horses: A Novel

8. Out Stealing Horses: A Novel

9. Out Stealing Horses. [Paperback] Petterson, Per