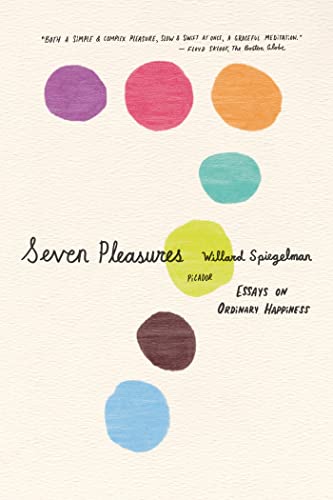 What does it mean to be happy? Ever since the Founding Fathers invited every citizen to join the pursuit of happiness, Americans have been studying and pining for that elusive state of mind. But rather than explaining happiness, in Seven Pleasures Willard Spiegelman demonstrates it: he immerses usin the joyful, illuminating practice of seven simple pleasures ―dancing, reading, walking, looking, listening, swimming, and writing―and evokes all the satisfactions they offer. Lighthearted, insightful, and deeply felt, Seven Pleasures is a portrait of pure enjoyment.

Willard Spiegelman is the Hughes Professor of English at Southern Methodist University and has been editor of the Southwest Review since 1984. He lives in Dallas, Texas.

This book has had a long gestation. It started with the fox-trot. The fox-trot has no raison d’être. There is no reason to dance at all except one—pleasure—and the greatest pleasure is calculated uselessness. One evening several years ago I stood on the sidelines at Manhattan’s Lincoln Center, watching the dancers at the three-week event called A Midsummer Night Swing. They were smiling; they were having fun. I took one look and realized that dancing can make you happy. This is a book about happiness, about the pleasurable things you can do to promote it and to increase a sense of general well-being, of what is called sanguinity.

A second beginning came out of a tête-à-tête between two people who knew they would never see one another again. Intimate conversations like this often take place on bar stools late at night in out-of-the-way places. Mine occurred last year in transit. I had just sat down in a plane and strapped on my seat belt when an attractive woman—mid-forties, well coiffed, well dressed, well-heeled, and wearing good jewelry—took the adjoining seat. After takeoff we exchanged amenities: “Where are you going?” “What do you do?,” that kind of thing. At a certain point I sensed the conversation turning toward an always uncomfortable topic for an adamantly secular Jewish agnostic like me, but because my pleasant seatmate did not seem a garden-variety proselytizing evangelist, I followed her lead. She asked about my “spiritual” life, a coded but clear invitation to talk religion and salvation. I told her—politely, firmly—where I stood. Then she said that she had found comfort, and more, in Christ and his Church during an especially torturous period of pain and sorrow in her life. Whether this meant death, sickness, divorce, or the dark night of the soul, she didn’t say. And then she asked, “What is the most horrible thing that has ever happened to you?”

Seldom at a loss for words, I paused. Then it came: “Nothing horrible has ever happened to me.”

In Yiddish we say that a remark like this deserves a kine hora, an apotropaic reverse curse: “no evil eye.” Say that something wonderful will happen and you guarantee that it won’t. Even worse, to speak with confidence, let alone ebullience, comes close to bragging, and bragging always invites disaster to strike immediately. Every culture insists that you do something—spit, throw salt over your shoulder, knock on wood—to ward off that evil eye. Pride goeth before a fall. “Nothing horrible has ever happened to me.” There it is. It’s now in print and lightning hasn’t struck me—yet. Ordinary disappointments occur, the blues, concern for loved ones, moments of uncertainty and anxiety, but nothing serious, deep, or long-lasting.

“Suffering,” said Wordsworth, “is permanent, obscure and dark, / And shares the nature of infinity.” I have not endured major losses. I have enjoyed good physical health. I have not known tragedy or chronic darkness, only more modest shades of gray. Everyone has what I call the phantom vita: prizes not won, jobs applied for but not offered, unrequited love. So what? If you miss a bus, you can get on the next one. We should not overly lament life’s ordinary disappointments, but we must celebrate—soberly, not giddily or smugly—its ordinary pleasures. If we are lucky, these will suffice.

An old friend once asked me a question like the one posed by my American Airlines seatmate. “Have you ever been depressed?” she wondered.

“I’ve been sad, I guess, but never for long. What do you mean by depression?”

“Waking up in tears every morning, unable to get out of bed.”

“No, I’ve never been depressed.” And I doubt that I have deceived myself.

Because I am by inclination and profession a literary person, I often think—as I’ll be doing in these pages—in literary terms, with literary echoes in my ears or never far from my thoughts. I was reminded of Paul Ivory, a character in Shirley Hazzard’s The Transit of Venus, who says, “I have never suffered greatly... If you can reach fifty without a catastrophe, you’ve won. You’ve got away with it.” “Got away with it” implies you’ve committed a felony, that your happiness has outwitted our common fate, that you have circumvented destiny. Life has looked positively on me. I have got away with it. Luck, or perhaps more than luck, has followed me.

Four years ago I was having lunch at a businessman’s pub in central London with a college classmate, a journalist married to an Irishwoman and a longtime resident of the British Isles. Well-fed bankers in their bespoke Savile Row pinstriped suits surrounded us on all sides. We had just turned sixty. “Peter,” I asked, “if you were to die tomorrow, would you be able to say that you’d had a happy life?”

“Yes,” I shot back, gratefully. “This is why I don’t want to die tomorrow.” A decade earlier, a week following my fiftieth birthday, I had sunk into a momentary, uncharacteristic mini-depression, not quite a full-blown existential crisis or the dark night of the soul, just a dreary afternoon of clouded vision. Outside, it was January, bleak, gray, cold, and wet. Inside, I asked myself what life meant. And then it came to me: I realized that when one is fifty, life is more than half over, which is not necessarily true at forty. And, therefore, after fifty, one should not do anything one does not want to do, unless it is absolutely necessary. The happy man becomes a sprightlier version of Melville’s Bartleby the Scrivener. “Can you come to dinner next week?” “I’m so sorry, I won’t be able to.” “Will you serve on this committee to change the university calendar?” “I’m sorry, I would prefer not to.” No further defense, explanation, apology required. What a relief. Pleasure begins to trump duty. Voltaire said that “the pursuit of pleasure must be the goal of every rational person,” and if you add maturity to rationality as a factor to account for, then after fifty it’s pleasure all the way.

I had a happy childhood. I was a dreamy kid, distant, vague, dégagé, and as an adolescent somewhat surly. Never violent or aggressive, I preferred sarcasm, the little nasty remark, the occasional slammed door, and the retreat to the lair of my bedroom: that was the extent of my adolescent rebellion. No Sturm und Drang. I smoked cigarettes. I never would have thought of disobeying or running away. I was a good, relatively normal, suburban boy, figuring out the facts of life with some help from my friends, and enjoying the pleasures of reading, writing, and school, the one place (as opposed to the playing fields or most other venues in the outside world) where I felt genuinely comfortable. “Safe as libraries, safe as schoolrooms” instead of “safe as houses” might have been my motto. And schoolteachers were—although not godlike—my role models. My parents weren’t intellectual or cultured enough for me: that was my biggest gripe with them. Once I had left home, set out in the world, and seen something of it, I realized that I had nothing to complain about. I had it made.

Home is where safety begins, and safety leads to ease. Ease can promote happiness, or at least its

Book Description St Martin's Press, United States, 2010. Paperback. Condition: New. Language: English. Brand new Book. What does it mean to be happy? Ever since the Founding Fathers invited every citizen to join the pursuit of happiness, Americans have been studying and pining for that elusive state of mind. But rather than explaining happiness, in Seven Pleasures Willard Spiegelman demonstrates it: he immerses usin the joyful, illuminating practice of seven simple pleasures --dancing, reading, walking, looking, listening, swimming, and writing--and evokes all the satisfactions they offer. Lighthearted, insightful, and deeply felt, Seven Pleasures is a portrait of pure enjoyment. Seller Inventory # AAV9780312429676

Book Description St Martin's Press, United States, 2010. Paperback. Condition: New. Language: English. Brand new Book. What does it mean to be happy? Ever since the Founding Fathers invited every citizen to join the pursuit of happiness, Americans have been studying and pining for that elusive state of mind. But rather than explaining happiness, in Seven Pleasures Willard Spiegelman demonstrates it: he immerses usin the joyful, illuminating practice of seven simple pleasures --dancing, reading, walking, looking, listening, swimming, and writing--and evokes all the satisfactions they offer. Lighthearted, insightful, and deeply felt, Seven Pleasures is a portrait of pure enjoyment. Seller Inventory # AAV9780312429676